Born as James Ure on 10 October 1953, Cambuslang, Lanarkshire, Scotland (UK). Guitarist/vocalist Midge Ure began his professional music career with Salvation, a Glasgow-based group that became the bubblegum band Slik in 1974. By this time, he had adopted his more famous nickname, which came about by reversing the name Jim to Mij and altering the spelling.

After musical differences, Ure left the band to join the Rich Kids, a punk-pop group led by former Sex Pistol bassist Glen Matlock. The Rich Kids only released one album, 1978's "Ghosts of Princes in Towers", before breaking up later that same year. Ure spent a brief time with the band Misfits before forming Visage with drummer Rusty Egan and vocalist Steve Strange.

He left this group after being requested to replace Gary Moore in Thin Lizzy during an American tour. This was just before fulfilling an earlier agreement to join the band Ultravox. Midge Ure proved instrumental to making the band a household name. Their single 'Vienna' (1981) reached number 2 in the UK, but topped the charts in various European countries. The album of the same name remains one of the classics of the 1980's.

While still writing and recording with Ultravox, he recorded songs with Phil Lynott ("Yellow Pearl") and Mick Karn ("After A Fashion"), and in 1982 enjoyed a UK Top 10 solo hit with his version of "No Regrets", previously a hit for the Walker Brothers.
In 1984 Midge set up Band Aid with Bob Geldof. Their joint composition, the multi-million-selling "Do They Know It's Christmas?', was inspired by harrowing film footage of famine conditions in Ethiopia and featured an all-star cast of pop contemporaries. Ure was also heavily involved in the running of 1985's spectacular rock concert, Live Aid.

While Band Aid and Live Aid are by far the biggest projects Ure was involved in, he did a lot more work for charity. In 1987 he organised the Prince's Trust concert at Wembley, followed in 1988 by the second edition of Prince's Trust at Royal Albert Hall and the Nelson Mandela concert. In 1991 he was involved in the Rock-a-Baby concert, together with Kim Wilde.

He joined Kim Wilde and others during the Here and Now Tour 2004. Then in 2014 he appeared on the Rock meets Classic tour together with Joe Lynn Turner, Uriah Heep, Kim Wilde and Alice Cooper. 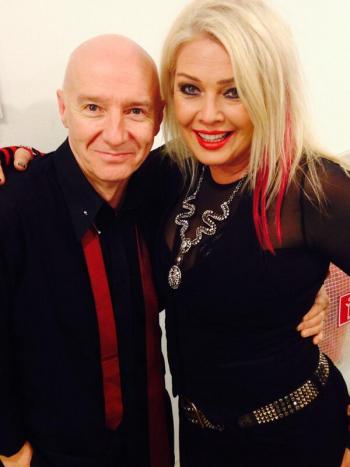