Duo based in Leeds, Yorkshire, England, consisting of Jez Willis (born 14 August 1963, Brampton, Cumbria, England) and Tim Garbutt (born 6 January 1969, London, England). Both were formerly members of MDMA, who practised an unlikely and somewhat unappetising hybrid of electro-gothic dance. They released five 12" singles on their own Ecstatic Product label, the band name taken from the chemical label for the XTC drug, though neither of the band have actually ever used it. However, both were more than familiar with developments in the club scene. After MDMA Willis started DJing, specialising in '70s disco evenings, while Garbutt had already done so since the late '80s onwards. Together they established their name at their own Mile High Club nights at Leeds venue the Gallery. These were such a success that corresponding events also transferred to York and then London. They soon returned to recording, however, using the Utah Saints? moniker salvaged from Nicholas Cage film "Raising Arizona" (it had previously been employed on a MDMA b-side).

The duo's move into dance, resplendent in samples and a driving backbeat, proved much more successful than the efforts of their former incarnation. After their first chart hit "What Can You Do For Me" (with a sample taken from the Eurythmics' 'There Must Be an Angel (Playing With My Heart)'), they moved on to 'Something Good'. This first international hit was built around a sample from Kate Bush's 'Cloudbusting'. They then backed Neneh Cherry on a version of the The Rolling Stones' 'Gimme Shelter' for a campaign for the homeless in 1993, one of several acts to release the song. Their own follow-up was 'Believe In Me', this time featuring a sample of Philip Oakey of the Human League on 'Love Action'.

In 1993, they were approached to do a remix of Kim's Kids in America for her 1994 remix single, but this remix actually never happened, due to the fact that they were too busy at the time. Kim did mention the Utah Saints' remix many times during European interviews, but that was apparently before she knew it wouldn't happen after all. 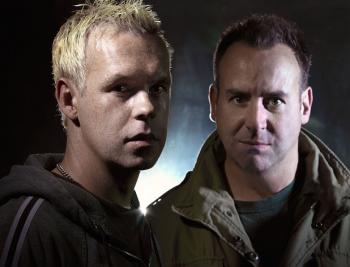