Born 27 May 1970, Katrien Vercaigne is an accomplished photographer who studied one-year graphical design, after modern languages at elementary school, before studying photography at the national radio and film institute in Brussels. She graduated with a thesis and a master in fashion. Immediately her first job was a press folio in 1993 for a Belgian band called Elisa Waut. The pictures were widespread in magazines and newspapers. This was the start of more pictures from Belgian artists and bands for magazines and portfolios.

In the mean time, she started working with models on assignments for fashion and beauty shoots. She was selected by Pentax Benelux at the Brussels Expo to exhibit 10 photos of her work at a professional photographers expo. At the 'Classics' expo in Kortrijk, she was asked to cover the runway show from Pierre Balmain that was showing his couture designs.

But when fashion turned to "grunge" Katrien decided to turn away from this, with the from time to time glamorous exception to the rule.

Having had personal challenges, she prioritised her direction in photography, finding herself more self-assigned. This led to new projects in interior and outdoor lifestyle shootings and a Victorian themed exposition with about 50 photographs on show. Her work combines glamour and personality in decorative and nature settings.

Between 2001 and now she has photographed Kim on stage numerous times, during live concerts in Belgium, the Netherlands, France, Germany and the UK. She has also made photographs for a few remarkable productions for the web, for instance the Kim Wilde in Brighton backstage report and a full digital recreation of Kim's award-winning Cumbrian Fellside Garden, created in cooperation with Marcel Rijs. 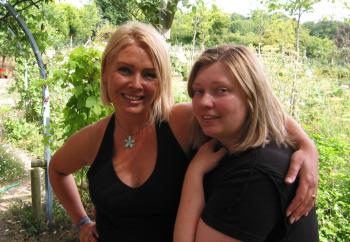 Katrien Vercaigne and Kim Wilde in 2005