The group, sponsored by UK's Vernon's football pools started out as a singing group of 70 members. They sang songs like 'Nymphs and Shepherds'. The choir was reduced to 16 by the end of the 1950s and was regularly seen on pop television shows like 'Oh boy'. They recorded for the Parlophone label between 1958 and 1961, but no hit singles resulted from these recordings. Their only hits appeared on Decca when they were reduced to the trio of Maureen Kennedy, Jean Owen and Frances Lee in 1962 and 1963. The first hit was a cover of Clyde McPhatter's "Lover please", which reached no. 16 in the UK chart. Other hits were covers of "Loco-motion" and "Do the bird", and the original song "Funny all over".
The group continued with frequently changing personnel, playing the cabaret circuit in the UK and recording on different labels, such as PYE and Galaxy.
One member, Joyce Baker, later married singer Marty Wilde. Members of the original television group have been frequently seen backing artists on UK television and been heard singing backing vocals on countless hit records. 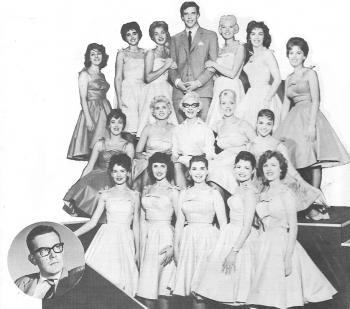 The Vernons Girls, with Joyce baker on front row left.