The Virgin Suicides was formed by four unnamed sixteen year olds in Cambridge in 2001. In 2003 they released their debut EP 'Plough over the bones of the dead', described as a 'punk masterpiece'. Also in 2003, they released a compilation of demos, including a cover version of Kim Wilde's Kids in America. When half the band moved to university, it became hard to maintain the 'gang mentality' which is so essential for punk bands. In 2004 the band recorded some further demos, but there was increasing disagreement about the new musical direction they were taking. A few shambolic gigs followed, culminating in one more chaotic than usual at the Portland Arms in Cambridge which lead singer and guitarist Dickon walked out of mid-set. They have not gigged since. 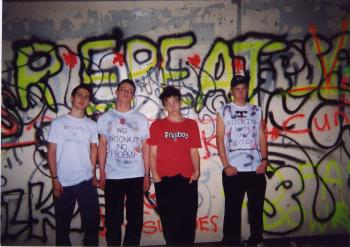