The synth-pop group Visage was formed in 1978 by Steve Strange, Rusty Egan and Midge Ure. They set out to make music to fit into the playlist of Strange's favourite nightclub at that time, Billy's. The music played there was very different from the punk sounds that were popular at that time: David Bowie, Kraftwerk and Roxy Music were favoured.

Their first demo yielded the single 'In the year 2525', a cover of the song by Zager &: Evans. Visage became the force of the Blitz movement at the time with fashion, makeup and music selling millions of records.

Visage's brand of synthpop proved to be successful for a few years, with hits like 'Fade to grey', Mind of a toy (1981), 'Night train' and 'Pleasure boys' (1982). Of their songs, 'Fade to grey' is still the most recognised one, after being a hit in most European countries as well.

In 2002, Steve Strange performed live as Visage and joined Kim during the Here & Now Christmas Party. 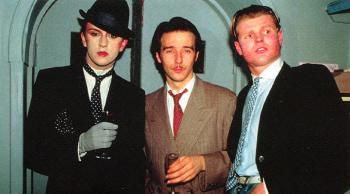