Song written by Sonny Curtis. It was recorded by The Everly Brothers in 1961, and went to number 1 in the UK and number 7 in the US Billboard Hot 100 charts. In an interview, Sonny Curtis said about the song, "I wrote most of that one Sunday afternoon, while I was doing my basic training in California, just after I went in the army, although I had the guitar riff for a while. And then Lady Luck stepped in. I never was much for guns, and still am not really into them, but out of 250 men in our unit in basic training, six of us fired expert, and I was one of the six! Anyway, for firing expert, they gave me a three-day pass, and I went straight down to Hollywood, and the Crickets were there, and so were Don and Phil, who were doing some acting classes for movies - they had just signed for Warner Brothers. So J.I. (Jerry Allison of the Crickets) told me to sing the song for Don - actually I had only one verse written - and Don called Phil down, and they worked out a gorgeous harmony part. So they said, 'If you write another verse. we'll record it'. Anyway, I went back to base, and wrote a second verse, and put it in the mail to them, and next morning, I got a letter from J.I. to tell me that the Everlies had already recorded the song before they got my letter - they had simply recorded the first verse twice! And that's the version that was released, and that's the version that was the hit! The joke is that Perry Como and Andy Williams and a whole bunch of others including myself, recorded the song with the second verse included, but when Anne Murray did it in 1978, she just did the same as the Everlies, just the one verse - and that was a big hit all over again - so maybe the second verse was never meant to be!"

Kim Wilde sang the song at the wedding party of Perry ap Gwynedd on 2 March 2013 in London together with Perry's mum, a lady dressed in lilac. A video of this was uploaded on YouTube by Llinor ap Gwynedd (Perry's sister) the day after with the title 'The Lilac Fascinators'.

A live recording of Marty Wilde performing 'Walk Right Back' at the Lewisham Town Hall  on 5 February 1974 appeared online in 2017, featuring his wife Joyce and his kids Ricky and Kim on backing vocals. 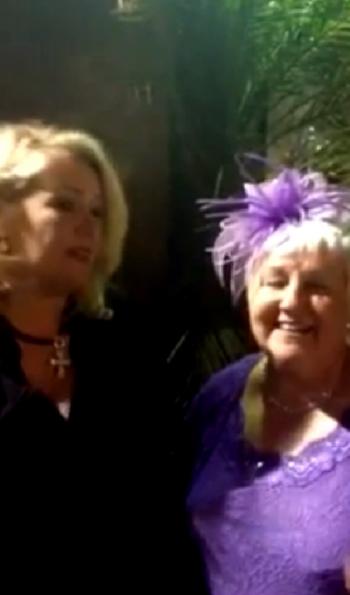 Walk right back to me this minute
Bring your love to me, don't send it
I'm so lonesome everyday