The Wasp synthesizer was made by Electronic Dream Plant, a British firm which manufactured audio synthesizers during the late 1970s and early 1980s. The company was formed by musician Adrian Wagner (a descendant of the German composer Richard Wagner) and electronics designer Chris Huggett. It was a small company and none of their products were particularly successful commercially.

The Wasp was undoubtedly EDP's most famous product, distinctive for its black/yellow colour scheme and brittle, cheap construction. It was notorious for its lack of a mechanical keyboard; instead, it used flat conductive copper plates, hidden under a silk-screened vinyl sticker. This was claimed to be unreliable, unintuitive, and devoid of much of the expression present with a real keyboard. Despite these flaws, the Wasp was fairly advanced technologically. It was one of the first commercially available synthesisers to adopt digital technology, which at the time was just beginning to become a standard. It also utilised a proprietary system for connecting several Wasp synthesisers together, predating the invention and standardisation of MIDI by several years. The digital interface should not, however, be confused with MIDI, even though similar DIN plugs are utilised (7-pin DIN instead of the 5-pin DIN which MIDI standardized to).

Ricky Wilde used the WASP synthesizer to write the music of Kids in America with, back in 1980.

Ricky about the Wasp

I had this little keyboard called a Wasp and it was my first synthesizer. It was about 120 quid or something. With this synthesizer - it didn't have a keyboard, it's just a flat pad with a keyboard drawn on it - you'd hit the note and it would have a rhythm going (mimics the intro of 'Kids in America'). Literally you wouldn't play that but you'd just hit the keyboard. It was kindof interesting for me to be able to hear the rhythm and play the chords, and you could actually program it to play chords. I was fascinated by this little thing and it was just so easy for me to write with this little Wasp. I used that on pretty much all the early couple of albums. Mickie Most will tell you when I first went up to RAK, he said bring in your own gear and I would literally just turn up with this little Wasp. Everyone was looking at me laughing, but I'd say 'this is my synth', you know... I wrote 'Kids in America' in about half an hour, no longer than that. It was really quick and the studio had already been booked so I knew I needed a song to cut, so I thought I'd better write one. Me and dad just sat down one night in the front room and I had my little Wasp synthesizer, whacking away, and it just suddenly came. It was an easy process. (1) 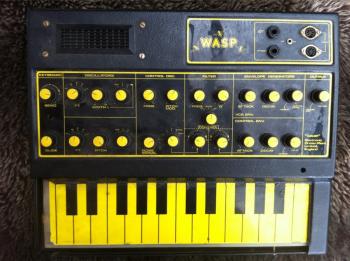