Born as Joyce Baker, she joined the Vernons girls in the '60s to achieve some minor successes before marrying Marty Wilde. She suffered several miscarriages, but she gave birth to Kim, Ricky, Roxanne and Marty junior. Joyce has been actively supporting Kim's career as her manager since her career took off in 1981.
She also provided backing vocals on the 1982 track Can You Come Over.

My mum is a very strong woman. She runs Big M Productions which is the mainstay of our management. She really manages all of us. When you've got people like that behind you you're always ready to give it one more go. (1)

She's certainly someone you don't want to mess with. She's a real character. She's very strongwilled and has her own very strong opinions. (...) We always had a bit of a clash. It wasn't til I got into my thirties that I started to understand her and understand myself and how we could be strongwilled together instead of fighting. That's the sort of mother-daughter parennial scenario, I think. (2)

You didn't mess with Mum. Ever. If you messed, voices would be raised to heights you wouldn't want to hear, and the atmosphere would turn into something you didn't want it to be. It wasn't an ideal childhood because Dad was away a lot and Mum was the disciplinarian and she used to get stressed out. She had two little babies and she was trying to juggle all these things, like wanting to do what young people do and wanting to be with Dad.
(...) Mum is generous, tenacious and very strong. We have a lot in common: we both like to get what we want. (3) 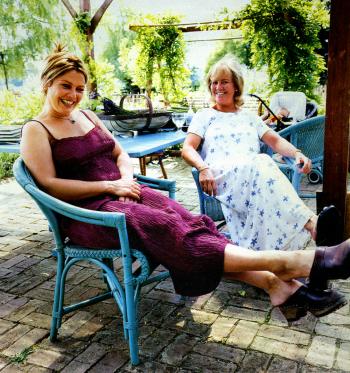