Born on 7 January 1969, Kym Wilde is not a member of Kim's family and was born and raised in the United States. Kym is a rather successful actress in the adult entertainment industry. She started aged 21 and did her final on screen appearance in 2004.
Her "On the edge" series focuses on the SM scene, but her striking physical appearance has also put her into the more "regular" adult movies.
She did her first job as a director already in 1992 and is still working as a director in the adult entertainment industry. 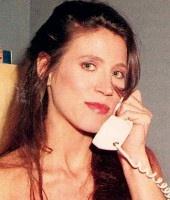