After playing briefly in a skiffle group, Reginald secured a residency at London's Condor Club under the name Reg Patterson. He was spotted by songwriter Lionel Bart, who subsequently informed entrepreneur Larry Parnes. The starmaker was keen to sign the singer and rapidly took over his career. Reg Smith henceforth became Marty Wilde. The first name was coined from the sentimental film 'Marty' while the last name was meant to emphasize the wilder side of Smith's nature. Parnes next arranged a record deal with Philips Records, but Wilde's initial singles, including a reading of Jimmie Rodgers' Honeycomb, failed to chart.

Success came in July 1958 when Marty Wilde scored a number 4 hit in the UK with 'Endless sleep'. From mid 1958 to the end of 1959, Wilde was one of the leading British rock and roll singers, along with Tommy Steele and Cliff Richard. Wilde's backing group were called the Wildcats. At various times they featured Big Jim Sullivan on lead guitar, Bobbie Clarke on drums, Brian Locking on bass guitar and Brian Bennett on drums. Locking and Bennett later joined the Shadows.
Marty appeared frequently on BBC Television's music programme, 6.5 Special. Soon after, Parnes persuaded the influential producer Jack Good to make Wilde the resident star of his new television programme 'Oh Boy!'. After considerable success with songs like 'Donna', 'Teenager in love', 'Sea of love' and his own composition 'Bad boy', Marty veered away from rock & roll. His marriage to Joyce Baker of the Vernons Girls was considered a bad career move at the time and partly contributed to Wilde's announcement that he would henceforth be specializing in classy, Frank Sinatra-style ballads. His 1969 album 'Diversions' was a demonstration of his songwriting skills and his versatility as a performer. The song 'Abergavenny' was not a hit in the UK, but did go to number 5 in the Netherlands. The track 'Lullaby' was written for his daughter Kim.

Marty enjoyed success as a songwriter in the late 1960s and early 1970s. He penned the Casuals' 'Jesamine', Lulu's 'I'm a tiger' and the early Status Quo hit 'Ice in the Sun'.

In the early Seventies he tried to launch his song Ricky as a pop star, but after a few hits in Scandinavia, this failed. In 1981, his daughter Kim proved to be more successful. Kim Wilde would go on to achieve far greater chart fame in the UK and USA than her father. However, he did have a lot to do with her success: he wrote most of the songs on her first three albums Kim Wilde, Select and Catch as Catch Can, and also contributed songs for the three following albums Teases & dares, Another step and Close. He also sang backing vocals on Suburbs of Moscow. He never did a live show together with Kim, however they did perform live together on some rare occasions, most notably during the Action for AIDS concert in 1987 when they performed Sorry Seems to Be the Hardest Word together.

In 1994, Marty released a cd called 'Solid gold', which contained his own versions of the songs Shane and You'll Never Be So Wrong.
Two years later, 'It's been nice' followed, with new interpretations of his big hits as well as some other tracks. On the third album from the Nineties, a digital remaster of 'Born to Rock 'n' Roll', five new tracks were included. One of them is Marty's own version of Kids in America.

During his later years, Marty continued to tour almost every year with a varying line-up of rock and roll stars from the 1950's and 1960's. In 2007 he celebrated 50 years in the business with another UK tour which featured his youngest daughter Roxanne Wilde, and the issue of a compilation album, 'Born To Rock And Roll - The Greatest Hits'. It included a duet with Kim Wilde of Elton John's Sorry Seems to Be the Hardest Word, which was released as a promotional only single. They performed the song live again during a performance at the London Palladium, which was filmed and released as a DVD a year later.
In 2013, when Kim released her album Wilde winter songbook, she recorded the track White Winter Hymnal with Marty, and they performed this song live on stage at the Shepherd's Bush Empire on 21 December 2013. Marty also appears in the music video for this song.
At the end of 2016, it is announced that Marty will be awarded an MBE. On 5 May 2017 he went to Buckingham Palace with his wife and daughters to receive the MBE from Queen Elizabeth.
In 2020, Marty released his first original studio albums in years, entitled Running Together. It features his own version of Cambodia, five tracks sung by Roxanne and a duet with Kim: 60's World. He records music videos for this track and the title track, with Kim directing.
At the end of 2020, he also releases two Christmas tracks, Christmas All Over The World and Christmas Fantasia, with two more music videos together with his two daughters under the direction of Hal Fowler and Rose Fowler.

I thought Kim would be a big star from the moment I first saw her on Top Of The Pops. When I finished watching the video I said, 'Game, set and match!' That was it. (1)

When I'm on the road, I say I'm going to quit because the travelling is stressful. But once I get home, I start putting dates in the calendar! I don't want to bore people to death or look a fool, but I'd like to keep performing till I drop. I don't want to sit in a nursing home somewhere... (2)

When I was little I could never decide whether I loved or hated the fact that my dad was different from my friends' dads. While their fathers were coming home at six o'clock, my father was just going out to work, or he'd be away on a singing tour.
I was never in any doubt that, despite his absences, Dad did love me and my brother Ricki. He always showed me his emotions, and would sing us a lullaby which he'd written especially for us. It's one of the most beautiful songs I've ever heard. (...)
On the creative side, Dad and I are similar. We're critical of our own work. (3) 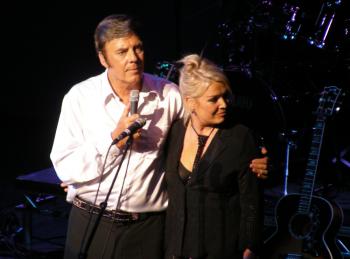