The youngest child of Marty Wilde and his wife Joyce. Having had an interest in golf since his fourteenth birthday, Marty succeeded in forging a professional career in the sport.
His amateur years were highlighted by a fourth-place finish at the Daily Telegraph Junior Championships ? the largest competition of its kind in the world ? which was played in 1997. Only the top 14 boys and girls in the United Kingdom were invited to play and Marty was the youngest qualifier to compete.

He also tried his hand at collegiate golf, traveling to the U.S. to play at the University of Nebraska, while studying sports psychology. Marty says he enjoyed the experience tremendously, but couldn't handle the harsh winters and returned to England in his second year.

In September 2005, he married his childhood sweetheart Nina. They had a son called Miller, born 31 December 2006. 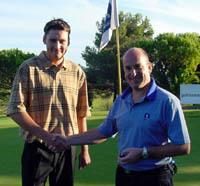