Born on 6 November 1961 as Richard James Reginald Steven Smith, Ricki is Kim's younger brother and originally he was thought to follow in his father Marty's footsteps. He released his first single in 1972, called I Am an Astronaut. Subsequent singles were 'Do It Again, a Little Bit Slower', 'I Wanna Go to a Disco' and 'Teen Wave'. Recordings of new material in 1980 led to the 'discovery' of his sister Kim.

Rick's new role was that of producer and (co-)writer, a role he kept up throughout Kim's musical career.
When Kim went away from her music career by the end of the 1990's, Rick started producing and recording with other artists. After the sale of Select Sound Studios he created his own home studio. After some time he got together with two friends and formed the band Sonic Hub.

Meanwhile, Kim returned to music, and Rick was there to play guitar during her gigs. He also produced tracks on her new albums, released between 2006 and now.
With his wife Mandy he's got two sons, Marty III (born in 1986) and Mason (born in 1997) and one daughter, Scarlett (born in 1989). When Marty III had a daughter in 2013, he became a grandfather.

He has been in music for a longer time than I am, even though he's a year younger than me. I always dreamt of becoming a singer, but it was more or less carved in stone that Ricky would succeed Marty, so I forgot about that dream. Last year Ricky asked whether I would like to sing a song for him which he'd wrote with my father. And that song was 'Kids in America'. (1)

We work very similarly in the same way Annie Lennox and Dave Stewart do. Ricky just chooses not to be a public person. He's very private, he has his own family and he's very glad to give up the stardom part of it after having tasted it when he was younger. When he was about eleven years old he used to release records and I don't think it made him very happy. He got teased a lot at school and life was made unbearable for him, so it put him off for life. (3) 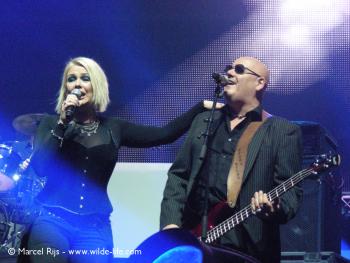 Kim and Ricky performing live at the Ethias Arena in Hasselt (Belgium), 7 November 2009