Born as Roxanne Elisabeth Jessica Smith on 24 July 1979. Roxanne (a.k.a. Roxy)  is Kim's youngest sister. At a young age she took up horseback riding, and even considered making it her career.

Roxanne performed live a few times during her teens. She appeared at the annual festival of the Society of Distinguished Songwriters in December 1994, singing backing vocals, and at the wedding of her sister Kim with Hal Fowler. At that occasion she sung a composition by Ricky and Marty, So wide awake.
Meanwhile, she was also involved in the short-lived Earthboy (or Fly) project.

In July 1999, it was announced that Roxanne 'and her band' had signed a contract with Polydor to release an album in 2000, making her the third of Marty's children to start recording music. The band finally surfaced as Dimestars in the autumn of 2000. They released two singles and performed live supporting Kylie Minogue during her tour in 2001. The album 'Living for the weekend' was never commercially released, although promotional copies exist. The band broke up in 2002.

Roxanne continued to sing for other acts. In 2002, she sang vocals on a track by producer/remixer/DJ Darren Tate, released as 'Destination' by DT8 featuring Roxanne Wilde to clubs in the UK on 12" vinyl. In April 2003, a cd-single release followed. The single peaked at number 23 in the UK singles chart. The accompanying video featured Roxanne.
November 2003 saw the release of 'Our Lips are Sealed' through Wall of Sound. Roxanne appeared as vocalist on the cover of the Go Go's hit recorded by Jon Pleased aka The Visitor.
In 2005 Roxanne continued to record demos with The Visitor for her debut album.
During writing workshops she has collaborated with people like Rob Davis.
In 2008, she started working as a backing vocalist for Kylie Minogue during her world tour. On her subsequent world tours she did the same.

Roxanne sang backing vocals on Light of the Moon (Belongs to Me) and Forgive Me. In 2007 she performed live with Kim during her European tour in February and March, and with Marty in April and May. She continued to tour with Marty in subsequent years.
In 2020, Marty released the album Running Together, on which she sings lead vocals on five of the 15 tracks.

'I persuaded Mum and Dad to call her Roxanne after The Police hit record. She looks upon me as a mother.' (1) 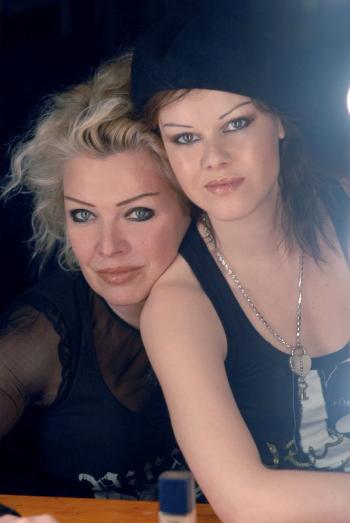