Born as Scarlett Lillian Smith on 9 March 1989, daughter of Ricky Wilde and his wife Mandy.
Kim and Ricki wrote the song Birthday Song for her.

In January 2006, it was announced that she would start a singing career of her own, having recorded a version of Billy Idol's 1985 hit 'White Wedding' for her father's record company Sonic Hub Records.

In 2007 she started appearing on stage with Kim Wilde during two dates of her European tour, singing backing vocals. In 2008 she joined Kim's band as a backing vocalist, taking in the place of Roxanne Wilde who went on tour with Kylie Minogue.

In 2008 she formed her own band, Scarlett Feeva. They performed live a couple of times in 2008 and 2009, but then broke up. Scarlett was then reported to be recording her first album. One video was premiered on YouTube in 2010, entitled 'Fight Temptation'.

Scarlett wrote the song My Wish Is Your Command (together with her father) and was credited for the vocal arrangement on Hey Mister Snowman.

At the end of 2015, she went to Australia for a year to enroll in an art college. During a three week stay in the UK in the summer of 2016 she performed live with Kim Wilde, like she will in November 2016 in Australia.

In 2018, she created the artwork for the album Here Come the Aliens plus the singles Pop Don't Stop, Kandy Krush and Birthday. She also co-wrote the songs Pop Don't Stop, Stereo Shot, Solstice, Birthday and Rock the Paradiso. 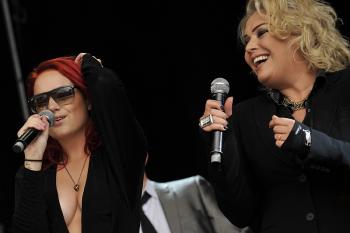