Born 18 May 1958 in King's Heath, Birmingham (UK), Toyah's acting career began at the Old Rep Drama School, in her hometown of Birmingham. Her first professional job was on stage at The National Theatre and her first notable role came in 1977 when Film Director Derek Jarman offered her the part of Mad in his seminal punk epic, 'Jubilee'. Later that year she put together the first embryonic line-up for her own band.

Toyah continued to gain acting roles, appearing alongside Katherine Hepburn in the film, 'The Corn is Green' as well as playing Monkey in 'Quadrophenia'. By 1979, Toyah's band was gaining critical success with the debut single "Victims of Riddle" and a 6 track EP and album, "Sheep Farming In Barnet". Meanwhile Derek Jarman asked Toyah to play Miranda in his innovative version of 'The Tempest', which won her a nomination as Best Newcomer at the Evening Standard Awards. She also appeared at the IC in Sephen Poliakoff's American Days and in the BBC series Dr Jekyll and Mr Hyde with David Hemmings.

The following year Toyah's album 'The Blue Meaning' became a top 40 hit. Acting roles continued too, including a lead part in 'Sugar and Spice' at the Royal Court Theatre. An ITV documentary and a live album 'Toyah Toyah Toyah!' confirmed her status as one of the most significant new talents of the eighties.
1981 saw Toyah complete a European tour, further television roles and chart success with 'It's a Mystery', 'I Wanna Be Free', and the album 'Anthem' and a live broadcast of her New Year's Eve concert from London's Theatre Royal; as the Old Grey Whistle Test Christmas Special.

1982 saw her winning Best Female Singer in the Rock and Pop Awards. Toyah discovered new skills as a wrestler when she played the leading role in Trafford Tanzi and went on to star alongside Sir Laurance Olivier and Greta Scacchi in Granada TV's film version of 'The Ebony Tower'. She played Sally Bowles in the West End production of 'Cabaret', appeared in The National Theatre's West End production of 'Three Men and a Horse' which won the Olivier Award for Best comedy and recorded the play 'Head Crash' for Radio which was subsequently banned and has only been broadcast almost twenty years later.

With her husband Robert Fripp she formed the band Sunday All Over The World whose debut album Kneeling at the Shrine received worldwide rave reviews. In 1988 she played Hermia in 'A Midsummer Night's Dream' at the Birmingham Rep.

In 1989 she joined the National Theatre to appear in their production the 'Eco-tale Whale'. She continued to tour and record with Sunday All Over The World and then starred in the successful tour of The Taming of the Shrew for the Cambridge Theatre Company. It was during this production that Toyah was invited to play the lead in Emile Zola's Theresa Raquin - a role, which she considered her best, and most challenging.
In 1991 Toyah starred in the BFI film The Anchoress directed by Chris Newby. January and February 1994 saw Toyah successfully tour in the musical play of the story of Peter Pan followed by a music tour of England, Ireland and South America until November. During this time, the album "Dreamchild" was released to rave reviews throughout Europe and America. Additionally Toyah was asked to present Meridian Television's 'Anything Goes' and 'Time Off' programmes.

In March 1995 she released a double album containing all Toyah's favourite tracks from her own material entitled Toyah Classics with the Royal Philharmonic orchestra guesting on three tracks. From June to September 1995 Toyah again played Puck in 'A Midsummer Night's Dream' at The Regent's Park Theatre London and appeared on the Anglia Television's magic and Mystery Show.

October 1995, Toyah presented the 'Discovering Eve' series for BBC1 a search of spirituality in women's lives. In November 1995, Toyah became the only female ever to play the title role in the BBC Radio 4 dramatisation of Peter Pan, which received massive critical acclaim.
January 1996, Toyah presented 'The Good Sex Guide Late' for Carlton Television every Friday night as part of the new late-night series of programmes.
Christmas 1996/New Year 1997 - Toyah played Jack in the Pantomime 'Jack & The Beanstalk' in Norfolk and in 98/99 was asked to play Jack again at the Richmond Theatre, Richmond Surrey.

In 1996 Toyah began to present on the 'Holiday' programme, 'Fasten your Seatbelts', and the 'Watchdog' series 'Face Value' all the for BBC. Whilst appearing on stage in various theatrical roles, and performing with her band, Toyah was asked in the spring of 1997 to present a series of programmes for the music channel VHI, namely 'Into the Music' and 'Weekend Review', which led to her presenting her own show 'Toyah!' from September 1997 to April 98.
During 1998 and 99 Toyah continues to present more 'Holiday' and 'Fasten Your Seatbelts' for BBC 1. At VHI she presented with Mark Chase the 'Toyah and Chase' programmes and since September 98 she was seen on VHI's 'Happy Hour' four days per week.
In February 1999 Toyah presented and sang in the Valentines Day Special of 'Songs of Praise' and in March 99 she began presenting on BBC Manchester's 'Heaven & Earth' Sunday Morning programmes.

Toyah continues to be a regular presence on television and also in music. In 2002, she participates in the second series of the 'Here & Now Tour', following in the footsteps of Kim Wilde, who did it in 2001.

Kim has mentioned Toyah several times during her career as a good friend in the business. 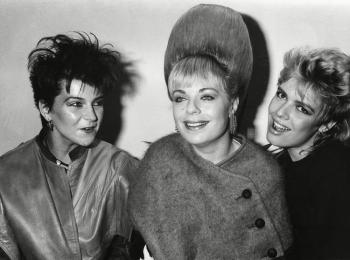 Toyah, Mari Wilson and Kim at the launch of Just Seventeen magazine, 1983