American rockband formed in 1989 by Erick, Rico, Ron Greer (a.k.a. Skip) and Ron Murphy. When Ron Murphy quit the band he was replaced by Jack Cheeze. In this line-up they recorded the track "Break" for a compilation album called "Can of pork". Subsequently, Rico was thrown in jail and replaced in the band by Dave Henwood (a.k.a. Dave E.C.).

Jack Cheeze didn't get along with Skip very well, so he soon left the band. Replaced by Richie Bucher, they recorded an E.P. called "Send in the clowns". In 1992, a tour across the US was planned, when Erick suddenly quit the band without an explanation. Skip and Richie started the band Here Kitty Kitty with Joe Selby and Kreig White, and recorded some demos. As Here Kitty Kitty they did a tour across the US in 1994.
Meanwhile, Skip asked their record company Lookout Records if they would be interested to release the Wynona Riders demos on CD, as he didn't want the music of that band to fade into history. When he asked Dave for his opinion on the release of these demos, he suggested that re-recording the tracks might be a better idea.

Skip, Dave and Richie got together, auditioned for a new guitar player, but eventually winded up working with Erick again. The recording sessions resulted in the album J.D. Salinger, containing a cover of Kim Wilde's Kids in America.
After the release of this album, Erick joined the band Jack killed Jill and announced that he couldn't tour with the Wynona Riders. Upon hearing this, the other three members kicked him out of the band for good. The band attempted to find an other guitarist, but eventually split up. 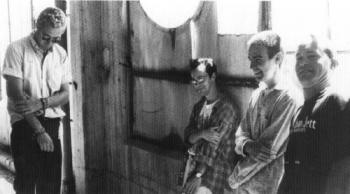