The Young Knives were founded by Henry Dartnall, Thomas Dartnall and Oliver Askew in 1998. They broke into the music industry in 2002 with the release of their debut mini-album 'The Young Knives... Are Dead', but began to gain recognition when they released the single 'The decision' in 2005. In 2006 they released their first proper album 'Voices of animals and men', which peaked at number 21 in the UK album charts. Also in 2006, they recorded a cover version of Kim Wilde's Kids in America, which received a rather limited distribution, as it was only released on a bonus 7" single with the LP version of 'Voices of animals and men'. The track was also included on a CD sampler included with NME magazine in November 2006, which remains the track's only release on CD.

Since then, they've released three more albums, with the latest one, 'Sick octave' (2013) being funded from a Kickstarter campaign. 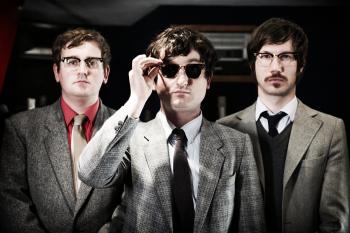