When the fans stopped screaming

Father's voice spun around the record player singing Lonely Avenue. His babies danced the Locomotion. And Mrs. Marty Wilde stretched her pink trousered legs and told me: "They warned us when we married that Marty would have to fight to get back his popularity."

A hard fight, because too many of the girls who screamed for pop singer Marty couldn't forgive him for his 1959 marriage to pretty Vernons Girl Joyce Baker. Unfair, but that's the way things go for a teenage idol, and Marty and Joyce knew it.

Now, over three years later, Marty and Joyce have a more than comfortable home in Blackheath, two children, considerable success, much happiness - and not one regret. Joyce was 17 when she married Marty with thousands of fans outside the church and mounted police to control the more exuberant.

She loved it. She's always loved the fans, and says sagely: "When they don't come clamouring around, then you have to worry. I've never been jealous of them; I think they are great."

So great, that when I called on Joyce she had just said goodbye to a long-standing Marty fan, a blind girl who had spent a few days with them. The Marty-Joyce secret engagement was "miserable" because of the worry about the effect of marriage on Marty's chart rating.

"I hated to think that Marty might be unhappy because of me, but when my Marty makes up his mind nothing can stop him. So we took the plunge. After all, you only fall really in love once, don't you?"

"When we married, Marty was just a pop singer. But since then he has widened his scope. There's his film contract, his summer shows, his ballroom appearances, his stage show, his song writing - oh, lots of things. I think Marty has made a tremendous comeback, and he has regained his popularity. Of course, you can never tell with pop records. Sometimes, when one of Marty's new discs fails to make the Top Ten we think 'Are we going square or something?'

"But we have great hopes for Lonely Avenue, his latest. We really are happier now than when we married. Marty is a wonderful man with a terrific personality. I'm a lucky girl."

In the early days, Marty was reputed to earn fantastic sums... £1000 a week and more. Joyce laughed when I asked her about it. "Well, I never saw all that. You see, you just get what's left after tax. We have what I would describe as a comfortable living."

The Wildes' semi-detached home is quietly luxurious, but not lavish. Joyce does all her own work, and is very houseproud. "If I had anyone in to do the work I know I would go over it all again and do it as I like it, so I don't bother."

Joyce always accompanies Marty to recording and social engagements, and then Marty's mum, Mrs. Smith, comes in from the house next door - Marty bought that for her - to baby-sit.

When she married, Joyce immediately gave up her stage career. "I didn't really have any talent for it", she said with engaging candour. "My ambition, though, is to make a demo-disc for the family, just for a giggle. Marty has written me a song, but I'm not after the hit parade. I couldn't let anything interfere with my private life. I think too much of my family for that."

Obviously Marty considers the loss of a few screaming fans to the bachelor-boys more than fair exchange. 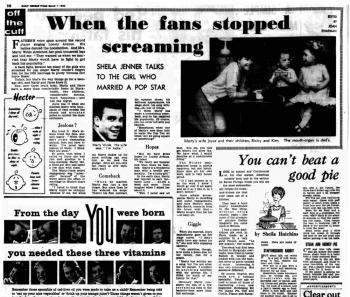