Gloucestershire is soon to experience the exciting talents of one of the country's youngest, but most accomplished stars, Kim Wilde. The chart-topping singer, who comes to Gloucester Leisure Centre on October 21, commands full houses wherever she plays, and everything about her has a tag of success.

The daughter of former pop star Marty Wilde, she has had all the nurturing that a healthy pot plant needs: strong, family roots, loving care from her record company, and a place in the sun that has come with a string of hit songs over the last 18 months.

This month, though, comes the final move from greenhouse to garden, as it were, from studio to stage. She never intended to go on tour until she had enough songs behind her and enough confidence to take her through a live concert.

But if her warm-up dates in Denmark were anything to go by, Kim might well have wondered why she waited so long.
"I was extremely nervous before doing the shows. I had no idea what to expect. But the audience reaction was wonderful", says the 21-year-old singer.

To look at her, little has changed since she first burst upon the music scene last year with "Kids in America". She still has that off-the-peg look from juble sale appearance, her blonde mane seems chopped and roughly harvested, and she has an air of being faintly bemused by the adulation that greets her everywhere.

Instead, it's the confidence, the perkiness that strikes one. The lessons she's learnt for herself, despite the careful watch on her well-being by RAK records boss Mickie Most, and her father, Marty.

"It's been a real education, has this business. At the beginning it wasn't so much that I couldn't handle myself, it was more that I found others intimidating. I wouldn't say I know everything now, but I do feel that I can deal with people more easily now", she says.

"I'm a lot happier too. The sort of happiness that comes from confidence and from being surrounded by a lot of love from friends and family. But the greatest thing I feel is that I'm involved in all aspects of my career, with the tour, with the band, working out concert programmes, designing badges, helping with the stage set for the tour. I'm genuinely interested in my career, and if I know what everyone else is up to I can appreciate the difficulties they come up against. I've learnt a lesson from my parents, too. Just to bve myself. They've given me faith in myself, and that's important. I've never felt I've got anything to live up to, or that I'm going to change for someone, but I do value my parents giving me tat confidence."

One tag she's picked up since she came to prominence is the "sex kitten", the Bardot lookalike. "Perhaps I ought to purr across the room and say I hate being a sex kitten", she says with a little giggle. "But actually I do hate it, though I'll admit I'd rather be compared with Brigitte Bardot and Debbie Harry then certain other people I could think of."

She's unattached, though, and still living at home. But Kim has bought a flat in North London, which, she says needs several months work on it. She's really bought the place for somewhere to stay when she's in London, rather than break the home ties she has with her family.

Home is her comfort and encouragement, understanding and protection. Home is a rambling thatched cottage in Hertfordshire that once belonged to Prince Bernhard of the Netherlands. Home, too is where everyone else is, including Ricky, her brother, who produces her records and cowrites her songs with Marty senior.

"I don't think I'll ever really leave home", she says. "I know I'll never leave mentally". Eighteen months ago Kim said she was never really seeking the top spot inj the charts. She considered that being around and consistently good for 10 years was more fulfulling than having three number ones. Nothing has changed.

"I'm glad that my records don't go straight there. I'd hate to be one of those artists the public always expect to shoot to the top. I like to put out my records on my terms, without that kind of pressure." 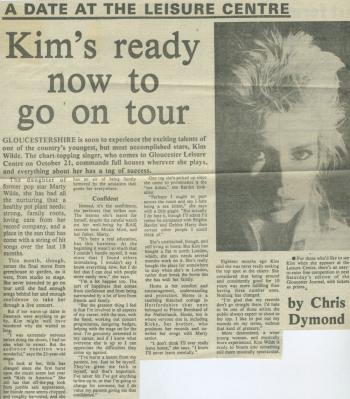