BJ tells you how Kim Wilde coped with her problems of growing up...

Pretty Kim Wilde must sturely be the number one contender for the Princess of Pop! After all, since the release of her first record, "Kids in America", in 1981, she has sold over eight million records worldwide...
But beneath the glamorous image is a thoughtful, home-loving girl who only just recently moved out of the family house in Hertfordshire into her own London flat. Here in the first of our occasional series of pop stars' secret tales of growing up, Kim Wilde talks about what life was like with a famous dad, having horrible teeth, and lots more besides!

I was happy most of the time when I was younger, but like everyone, I had my ups and downs.
We lived in South London until I was eight, then the whole family moved to Hertfordshire. I knew that my dad was Marty Wilde the singer, but he'd had most of his big success before I was old enough to understand what was happening. I used to go up and down the country with him to his shows, keeping him comapny during the long car rides.
He didn't exactly play posh venues, they were working men's clubs, but it was all very sincere stuff; Dad would do his show and then afterwards everyone would come backstage and say hello. That's how I started in show business...

But Dad being famous had its drawbacks. I didn't have any difficulty making friends or anything, but some of the children I knew would become jealous. In their eyes, they thought that their parents were dull in comparison, which was silly. They weren't very nice to me and gave me a bit of a hard time. My brother Ricky got more of it than I did, he came close to being beaten up a few times.
I don't experience any jealousy or envy like that now, or at least none that I'm aware of. Perhaps it's because I only mix with a small, close-knit circle of friends now!

I remember I used to get sixpence (that's six old pence!) pocket money every week and I always spent it on sweets. We used to get on our bikes every Saturday and whizz along to the local sweet shop. You could get a lot of sweets for sixpence then! I remember my absolute horror when the price of Mars Bars went up. I thought the world would never be the same again.

I always got on with my parents very well. Oh, we had the usual teenage traumas: "No you can't stay out late tonight, Kim!" and all that. The same treatment young girls receive everywhere! But I knew that they weren't ogres, and I tried not to resent them.

It was around that time that I became quite a difficult person to live with. I was very frustrated at school. I knew I wanted to be a singer but I didn't know how to make it happen. I was so moody! There I was, plodding through O-Level Maths and running up and down a hockey pitch when all the time I knew it wasn't what I wanted to do.
Dad was away a lot at that time but Mum understood what I was going through. She knew that I seriously wanted to sing.

The only thing I liked at school was art, it was a creative outlet and the next best thing to singing. I became really involved in it and got an A for my O-Level and a B for my A-Level. I also won the school prize for fine arts and painting.
I joined the dance and drama classes, too. Again because they were creative. I didn't smile very much at school because I had horrible little peggy teeth and I was embarrassed about them. I've had them capped since, though!

After sixth-form I went to art college and did a foundation course and very nearly ended up doing a degree. But I became my own worst enemy then. I didn't try and in the end got turned down for the degree course. But it was partly deliberate because I knew it would only be another two or three years of stalling because I still wanted to sing very much.
After I left college there was nothing for me to do. I tried to get involved with bands, but I was a bit young. Anyway, Hertfordshire wasn't exactly brimming with musical activity at that time.

Then my brother Ricky started writing songs and that's when everything began to fall in place. The third song he wrote was 'Kids in America' and after that it all happened quite quickly!

But underneath it all, I always knew it would happen in the end. I make things happen for myself and I'm going to make this happen for as long as possible. Remember it's an attitude you have to have about yourself if you want to succeed, and I've had it for as long as I can remember! 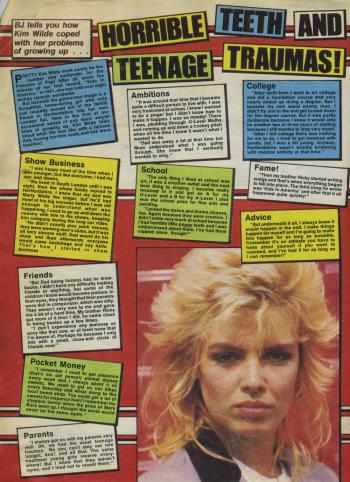