Dressed in a black, tight leather dress with side splits and a bare back, so that one has to be "afraid that the breasts fall out" - so sexy Kim Wilde (22) returns to the spotlights after a radio silence of eight months. "Love blonde" (TV premiere: September 6 in Bananas) is the name of her new hit, in which Kim Wilde sings about the blonde sex bombs à la Brigitte Bardot or Marilyn Monroe in a Swing-Jive-sound of the Fifties (with lots of saxophones and trumpets). Popcorn talked with Kim Wilde in London. During the interview she wore sandals, jeans a black men's shirt and no makeup...

Until now you have always dressed in jeans - now you are suddenly taking on a sexy guise. Why the change?
I am only wearing a dress for this one song, because it fits so well to the lyric. I bought it in London's boutique Joseph and spontaneously bought it - for 500 pounds (almost 2000 Marks). It's the most expensive piece in my life. I certainly wouldn't have worn it when I was younger, but now I feel confident enough to do it. It's only difficult to perform in it, because if you move to fast, the breasts fall out.

What's the lyric about?
I'm making fun of the typical image of blondes: imagined, sickly, nothing in the brain. Part of the lyric goes like this: "Something's coming down the street / Something static under your feet / Never looking left or right / 'coz she'll just blow you out of sight / She's never waiting on your smile / Situation no-go zone / But she'll cut loose when she's alone / She's a love Blonde"

Is the lyric also about yourself?
(laughs) Could be. You should ask my father, because he wrote it. That the song isn't meant too seriously is also shown by the video. I perform it with hundreds of blondes - from baby to grandmother.

Why did you take eight months to record the new record?
Part of it was intentional, part of it was unintentional. I have consciously taken some time out for personal things, I had to take some time off anyway. There was also a long time in the studio - we worked very hard for weeks. I look forward to some action again!

Will the next album have jazz or swing influences like "Love blonde"?
No, that's just a one time thing for this single. The album will sound rockier and with many synthesizers it will have the same style as my previous album. The album is released in September.

Does your boyfriend Gary play the saxophone on "Love blonde"?
Yes, I have never said he's my boyfriend. He does look good, but...

You live in your own apartment now. Would you like to live together with Gary?
No, I would like to live alone first. It's new for me, it's something I like to do.

In what style did you decorate your home?
Very feminine. The bedroom is romantic in soft green and beige. I slept in a hotel room in Paris once and I wondered about my own preference for it. I will move in in the first week of August - I can hardly wait.

The obvious question at the end: When will Kim Wilde perform live in Germany?
When "Love blonde" is a success, the rehearsals start immediately. I am ready for it! 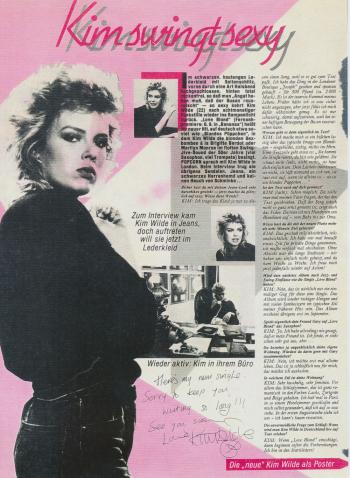