Sultry Kim Wilde has no problems about being spotted when she goes out shopping - 'I just put on a hat and wheel my trolley around the supermarket unrecognised'.

Kim sings her new hit single, 'Love blonde', on the pop and quiz show Hold Tight! (ITV, 4.20 tomorrow). How did it feel when her first record was a hit?

'Everything seemed to be going in a fast motion. My first 'live' appearances were terrifying, but it got easier after that.'

Kim, with her father Marty Wilde and brother Ricky, is building a recording studio, which is due to open in September. Says Kim: 'The Wilde empire is expanding. We share the same musical tastes to a large degree, and we all rely on each other and help each other out whenever we can.'

Bob Carolgees and Sue Robbie also introduce on this week's show Depeche Mode, currently in the charts with Everything Counts. 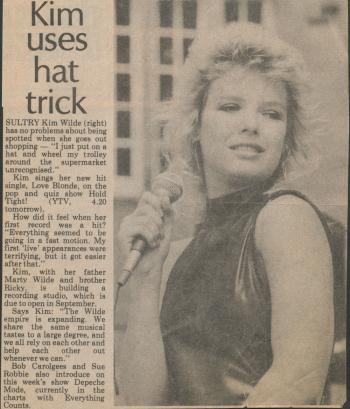