This is stunning Kim Wilde with the man in her life. The boyfriend of pop's sexiest star is dashing Gary Barnacle who plays sax in her band.

The happy couple turned up in the early hours to celebrate the first anniversary of London's hottest nightspot, The Camden Palace.

They have been going out together since Kim's autumn British tour last year, but have always shied away from publicity. This is the first time they have been photographed together.

Kim has always been coy about her romantic life. Last year she told me: "I have had several boyfriends, but I don't like to talk about them. I don't think I'd like a very steady relationship at the moment. I would get too involved and I don't think I could handle that." 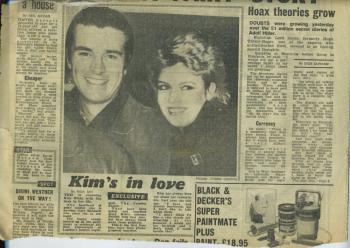