Popstars who decide they want to establish themselves as 'serious artists' are likely to get the same kind of rough ride as grass roots acts who have thhe misfortune to get themselves a hit single. One is accused of selling out while the other is trying to buy in.

How will it go for Kim Wilde, I wonder? Having made an impressive debut as a sweet but slightly racy teenager with a good pop voice - in other words an extremely marketable commodity - and having been nurtured ever since in the family bosom, she can have suffered little external pressure to change her image and modus operandi. But the fact is, the fomula hasn't been working so well of late. Result: Kim has changed labels to MCA, and has started to write her own material at last. her first efforts will be heard on her new album, cushioned, admittedly, between a brace of M&R Wilde compositions like the current single 'The Second Time' which received a less than generous review in this very organ.

But here we are just the same, bringing you a Sounds Kim Wilde feature in celebration of her blossoming creativity. "It always confused me why Sounds felt at liberty to plaster Clare Grogan all over their front covers but wouldn't dare talk to me", she says over a bowl of miso soup in the local Japanes restaurant. "It seemed quite hypocritical. But then I'm used to the hypocrisy of the music press."

Perhaps we're more interested now she's taking more control of her own artistic destiny, I suggest tactfully.
"But I always did", she counters. "Just because I wasn't writing songs doesn't mean I wasn't in control, or that I had any less control than I have now. But even now I'm getting knocked for writing songs. Journalists are saying 'everyone idolises you as the perfect pop poser and we don't want you to become a serious songwriter'.

What have been the influences on her own songwriting so far?
"The influences are from everywhere. What's in the charts, what was in the charts last year, what we used to listen to when we were kids... We didn't write with any preconceived idea about how we wanted an album to sound. Obviously we had the word 'single' indelibly printed on our brains, because that's the game that we're in. I wouldn't say the album's out-and-out singles but there are about four or five on there! We seem better at making that sort of music really."

What about her contemporaries? Who does she like that's around at the moment?
"I really like the singer in UB40. I'd love to hear him sing other songs apart from all this reggae stuff. I'd love to hear him sing a decent bloody song, y'know! And there's Chaka Khan, she's phenomenal. She is the only person who makes me feel like giving up. If I ever feel like giving up, it's after I've listened to her. Sometimes I put on one of her records and think... 'bloody 'ell'. I think that since the British scene is supposed to have invaded America again, the most enlightening thing about that - apart from all these British popstars becoming tremendously rich - is that it's opening people's eyes here to American music, which I think is more important. The musicianship they have, the presentation they have can only be good influences, I think.

"I got really exicted by Prince, too, as a performer. I really like the style and panache, you just don't get that here. You get ABC falling over their shoes and these other bands trying to do it. I just wish they'd stop, you know. If you wanna do that, you do it like the Americans do it, or you don't do it at all. I think people would far rather see a polished performance."

And now, the 64,000 dollar question. What about Kim Wilde as a live performer?
"Well, I think I could be really good one day. I really admire good performers like Tina Turner and Chaka Khan and Prince and Gary Glitter and that sort of glamorous performance, because it is so tongue-in-cheek and the way it comes across is so serious - that's the only way it could work."

So when is this all going to be put to the test?
"The next tour I do, I suppse. I haven't done one for a while. It's quite a daunting thought, really, But I definitely felt very different the last time I did a gig, which was a few months ago in France, at a festival with about 25,000 people. The Stray Cats were on, and Nina Hagen, and all these other 'serious rock acts'. There was I in the midst of it and I think they were wondering what the hell I was doing there. But I felt really good about it.

I sensed from our conversation that Kim Wilde had done interviews before. I got the feeling she's an old hand, at the ripe old age of 24 next week, at giving you what she thinks you need. It's a mark of the showbiz pro, a skill to be acquired along with learning to do your make-up and putting on a good show.

But while she seems to prefer to stay on the relatively safe ground of shop talk - inquiries about her private life having been ruled 'sensitive' in advance by her press officer - I can't say I found her answers any more trite than those of the supposedly serious artists who pass through these pages every week. In fact she's a sight more articulate than half of them, and quite plainly nobody's fool.

I found her sharp, but quite modest - an endearing combination. She has, at the very least, a sense of perspective that many of her contemporaries could benefit from. 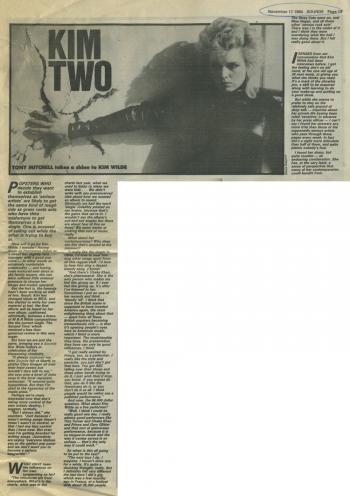