This new, aggressive look from Kim Wilde is fitting for her new single The Second Time. Actually, it's more like a second coming, with Kim attempting a comeback with a new label and a more independent lifestyle.

Her dad Marty and brother Ricki still write and produce much of her work, but Kim is gradually making inroads. She has co-written some of the songs on her album Teases And Dares due out next month. Boyfriend Gary Barnacle is thought to be responsable for her new independence. The couple share a flat in North London. 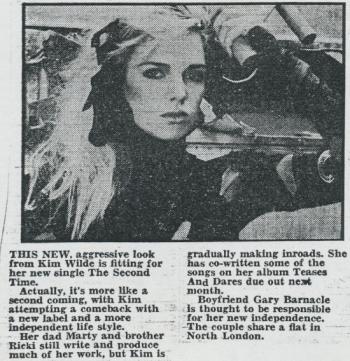