Kim Wilde is a real friend

A large list of questions and a photographer's bag full of film rolls. These were the things we brought for our trip to London to interview Kim Wilde. The rolls were all used, but Kim talked so much, that we didn't have much time for our list of questions...

"Kim asks if you'd want to wait for a moment. She's not ready with her make-up". With a friendly gesture Sonja Hardie, Kim's female manager points to a large leather couch. The office of record company RAK in the heart of London is filled with gold records. After we've taken a seat, our eyes are busy. Five minutes later the door swings open and Kim Wilde, dressed in black, enters the room. The photographer suddenly stops speaking. with a friendly smile Kim welcomes us. "Would you like a cup of coffee?", she asks. Yes, we would. Kim walks to the kitchen and comes back with a tray filled with mugs and cookies. When we give Kim the newest Muziek Expres she starts looking at them immediately. "Oh nice, Limahl on the cover!", we hear her mumble quietly. An article about [Dutch group] Doe Maar is studied intensively. "Nice boys they are! Who are they? I've never seen them before..." When we tell her of the amazing popularity of Doe Maar in the Netherlands, a light blush appears on Kim's cheeks. "I'd like to meet them", she says. Then Kim discovers an article about herself. "Would you like to translate that for me?", she asks sternly. We read her the article in our best English. Halfway Kim says, laughing, that we can stop. "I hear it. It's fine! You know, I've become a little wary... Sometimes I read nonsense about myself, you know."

After that we talk for an hour about lots of things. Very normally, like best friends. Sometimes interrupted by a fit of laughter. Kim talks about her family, her work and her fitness training. "You wouldn't believe it", says Kim with a sour expression on her face, "but I am overweight again! Now I'm eating apples all day. And together with Limahl I'm on fitness a couple of times per week. It's nice and all, but I don't think it helps."

About her work Kim says: "I'm taking over more and more things from my parents. In the beginning of my career my mother and father arranged literally everything for me. The only thing I had to do is be beautiful and sing songs. That has changed now. I'm taking the reins and I feel good about it. I want to be an allround artist and not be dependant on dad for everything. But of course I learned a lot from them and I'm grateful for that."

Then Sonja enters the room. She holds a tape in her hand. "Look what I've got here?", she says. it's the first tape of Kim's new single. Kim shrieks joyfully. "Give it to me! I want to hear it!" "Later", Sonja teases. But Kim can't wait and tries to get the tape from Sonja. When she doesn't get it, she pinches her. Sonja yells and the tape falls on the ground. Kim escapes and plays the tape. With her eyes closed she hums along to the music. "Great isn't it?", she shouts afterwards, and we couldn't agree more. To round off, we take a walk so that the photographer can make a few nice pictures of Kim. It's very quiet in the posh London street, otherwise Kim would be surrounded by fans. After and hour it's time to say goodbye. While the photographer clears up his mess, Kim says: "You will send me the new Muziek Expres, won't you? And will you come by another time?" You bet, Kim! 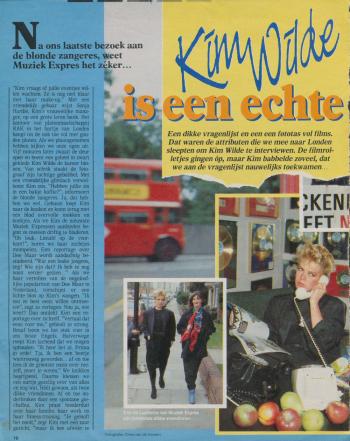 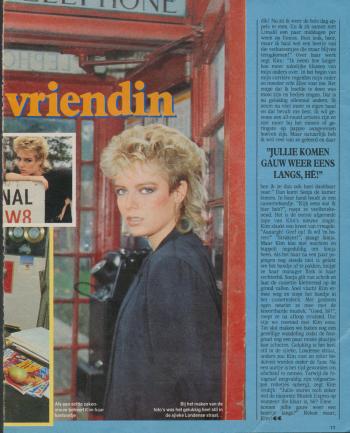