Finally! Kim Wilde: my first interview with a woman. No mouth with yellow teeth because of nicotine this time, but a row of pearly white teeth behind Bardot-lips couvered in rouge, no bloodshot eyes, but Galoises-blue ones, no flat 'old boys amongst eachother'-humour, but a flannel "Hi Patrick, pleased to meet you". I am enchanted and put out a cigarette in my Löwenbrau beer, affronting the waiters in the Luxembourg Holiday Inn hotel. Then the cherry red mouth opens and says: "Sorry! (hiccup) I've got the hiccups right now!". For a few seconds I am speechless, then I propose to put my fingers in her ears, a trick from my grandmother. She refuses politely. It's a pity. For a moment I entertain the thought of telling her that a long French kiss helps, but then decide to take more drastic measures: I show her my selfmade tattoo on my upper arm (a proud family of pelicans, on the right upper arm). She is scared out of her wits, the hiccups are gone and the first question comes up:

You moved to a different record company. Was RAK Records not good enough anymore?
There were different reasons for the transfer. After the success of "Kids in America" the firm didn't give us any support in America anymore. Incomprehensible! We thought that the people at RAK weren't focused enough on the future. They concentrated on singles too much, which can be choking in the long run. It's nice to play one hit after another live, but in ten yours I will probably be sick of "Chequered love" and "Kids in America". There have been lots of differences of opinion. But the most important thing for us was to have great albums beside our good singles. It was time to find new angles, to try out new things.

You say 'we' and 'us' all of the time, but in the end you are the only one who gets the flowers or the tomatoes. Your father and your brother stay out of sight when it goes less well, like last year. Don't you dislike that?
Usually I'm not bothered with it, because in this country you get flowers ánd tomatoes at the same time (laughs). I am not as worried about criticism as I used to be, it's irrelevant what they write about me in fact. What's more important, is what I do: songwriting, singing, making records, performing, and not what someone thinks he should say about it. Whether I get pats on the back or whether I get hit doesn't change the music. Even Elton John, who is a brilliant songwriter, is sometimes burnt down to the ground. Yes, then you think 'let them talk', and even I don't get aggravated anymore.

You don't take the rock press seriously anymore?
It depends on how cynical they are. I think that pop music and everything around it should be refreshing, a contrast with the boring establishment. In that sens you could say that a rock journalist has an informative and an entertaining task. But when a man can't form an opinion and dreams up a load of nonsense because it looks good in his paper, it's wrong, don't you think?

In the same way you have received as much unjust good criticism as well as bad.
Indeed, some were too enthousiastic (laughs) and felt that my image alone was enough to write about that. That's what you mean, don't you? You accuse me of using my image of the blonde sex kitten too much, aren't you?

Don't you think you have used your image as a blonde sex kitten too much?
(laughs) Not really, no, because I never did anything special for it. I am photogenic, I don't have to be ashamed of that, do I? After a while I found out how to look into the lense, how to move in a video, what side of my face is the best, but I never consciously did or said things that would help that image, quite the contrary. I think it's hard to smile all the time, to be friendly to strangers, it takes a lot of self discipline and that's not my strongest characteristic. Let it be known once and for all that not I, but the media have created that image. I was aware that I was being used, but it only dawned on me recently that I was just a young girl interested in music, and everyone around me was talking about sex and making posters of me.

I suppose that it's a drag to be confronted with that image all the time. Does that leak into your private life as well? In other words: can you make friends as Kim Smith more easily, or are people more attracted to the pop phenomenon Kim Wilde?
Difficult question. I have made very few friends over the last few years, but I don't know whether that's because of my image. I am quite careful with people, I don't expose myself so easily, pardon the expression (laughs), and in London, where I live since a year, I regularly meet my old friends from school. Since I've been successful in this business our friendschips have become even tighter. And what's strange is: they haven't made that many new friends either. It is always hard, but I know pretty quickly when someone's intentions aren't pure. When someone asks too many questions or gets upset when I haven't phoned in a few days, I know enough. I don't go out much, I avoid discotheques and pubs and wen I go out shopping I wear a scarf and no makeup, so that people won't recognise me.

Have you been harrassed on the street?
Oh, men can act so stupid. When I was in Paris recently I was persuaded to go to a discotheque by a friend. First they make me shy by playing a Kim Wilde single right away and then when I dared to come on the dancefloor, a Frenchman started dancing up against me. He kept repeating: "Miss Wilde you are sheet!" He was beginning to get on my nerves and I was ready to kick him, but my friend gave me the advice to ignore him. He gave up after that, and then I saw that he was there with a few giggling girls who forced him to harrass me. Pitiful.

And in the mean time father and brother Wilde are counting the money at home.
I don't mind that. We are a trio, of which only the singer can be seen. Frank Sinatra isn't giving concerts with his songwriters and producers tapdancing on the background, is he? Ricky hates publicity, prefers to stay in the background and dad has had his part, and he still does his own thing. Right, he is a sort of Svengali who put me on the road to sex, violence, corruption and money, but so what? I like it, because I've got enough control and I amuse the hell out of me.

When the success is over, would you miss this life?
If it was over right now, I would miss it, because I'm still so young. I only celebrate my 24th Birthday on Sunday. Popmusic has something to do with being young, so I've been advised to do it now, not when I'm 40. Now I can make mistakes, release lesser singles, because I've got the time to strike back. The past year I've been in the studio and writing, and I haven't thought for a minute that I was out of the public eye for so long. Many people have written me off but they will have to eat their words quickly. It's all about that in this business: being busy and learn from your mistakes. That's my biggest ambition. I want to remain interesting for the public, as a performer and as a human being. It's not important what you do on stage, just as long as it's honest there will be an audience for it. And if it all goes wrong I won't miss this life because something else would come in its place. I can do without the travelling, the interviews, the hotels and the cameras.

And when dad and brother have stopped writing, there's always...
...other songwriters and producers. Exactly. I am not obligated to keep working with Marty and Ricky. I have a studio of my own now, so that I can experiment as much as I like and try out my own songs.

That finally seems to work these days. 'Teases and dares' is the first album with songs written by yourself.
I'm working really hard on that, and I am very critical about myself. I have to be, because when my dad comes up with a lyric I don't like I throw it in the wastebucket just like tha tas well. Songwriting is very important, because it proves that I'm more than just an advertisement. It will give people something else to tal kabout. The same with live work. I used to be afraid of it, now I feel find on stage. i love the contact and the exchange. No man, you're not rid of me yet, I've just started.

I believe... hiccup! Yes. Would you like to put your fingers in my ears?
Sorry, but I've got a plane to catch. 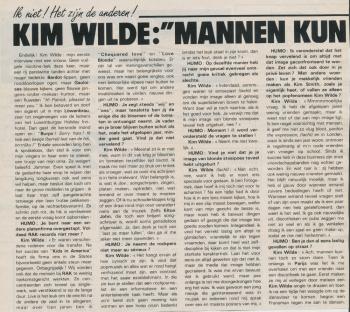 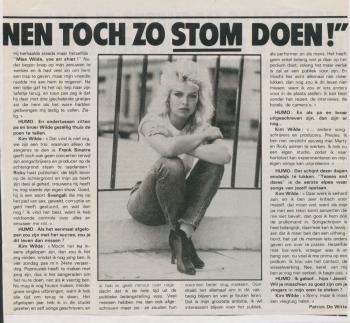