The call of the Wilde

Alright, we know that she's more than just a pretty face, but Michael Heatley reckons Kim is now actually starting to live up to her name.

We are about to see more of Kim Wilde. A lot more. Casting off traditional items of clothing, the young lady has assembled a collection of mindblowing scanties and now comes on like Lady Penelope's naughty daughter, with no strings attached...
What? Oh yes, the music. Well Kim recently had some chart action with 'The Second Time', there's a follow up single, entitled 'The Touch' plus an LP - 'Teases And Dares' - her fourth alltogether, and first for her new label MCA. It therefore seemed like a good time for a chat.
With Kim's father Marty writing the lyrics and brother Ricky writing her music, she's often been represented in the press as something of a puppet, unable to think or act for herself. So she's at pains to point out that the new look is entirely of her own choosing.
"This is completely off the wall. I wanted to do something different, and came up with this cross between Barbarella and Catwoman. I liked it for entertainment value , and I also liked it because it wasn't anything to do with fashion."

Kim's first hits back in 1981 were on the RAK label. Mickie Most's bubblegum factory that produced such solid gold singles acts as Mud, Hot Chocolate and Suzi Quatro, to name but three. Yet RAk were never quite sure how to market a singer who started off producing mindless pop ('Kids in America'), but then broke the mould and produced something different ('Cambodia', 'Love blonde').
While Kim will admit that some of the musical moves didn't come off, predictability - no matter how profitable - is something she dislikes intensely. "We like to explore lots of avenues, we don't want to put ourselves in a bag and say that we have to come up with Bucks Fizz records..."
You can take that Ms Wilde isn't too wild about those particular Euro visions.
A year out of the charts is a long time - after all, Kim's last hit was positively pre-Frankie! No surprise then to find that the new musical formula owes more than a tip of the hairpiece to Trevor Horn, something she blushingly acknowledges. "He's got to be one of the most interesting producers around," she smiles knowingly. And wasn't the video for 'The second time' a little Frankie-esque? No, let's be fair about this - Reagan and Chernenko clones are all very well, but Kim got to grips with this script herself. "Yes, I fight this guy in a pit... at the end of the video it all gets a bit weird and I get a bit paranormal. I end up having a fight with this warrior - and winning!"
You have to admit it beats World of Sport any day of the week...

A more appropriate choice of TV show perhaps would be The Generation Game, since Kim comes from something of a musical family. Dad Marty was a chart regular in the late Fifties as a kind of English Elvis when Shaky was still in short trousers, while Ricky - now Kim's keyboard player - was groomed for stardom by Jonathan King in the early Seventies. Both careers were shortlived, though, and Kim's well aware of the dangers of becoming yesteryear's ten dream - 'The second time' is clearly a title close to her heart. She's writing now too, and if that brings a little variety to her repertoire she's not complaining. "I like the fact that people get confused - I think people are such snobs the way they appreciate music."
To underline the point, she'll be belting out 'Love Blonde' - and all her past singles - as part of a new live show scheduled for early 1985 which will showcase her new backing musicians. "I always wanted to work with a band in the early days," she comments, "but it was just Ricky and me working together with Dad, that's the way it happened. Now we've created the conditions for a band to be there."
Judging by her reception on Top of the Pops, her second UK tour is more than overdue.
Whoever called the shots in the past, it's clear that Kim now feels much more at home with an image she's had a big hand in. "It's not just that they thought it was a good idea that I'm dressed up like this. I'm put in the scene and I do this and that", she says of the video. "Things are looking annd feeling very different to how they've been previously."
Though she's unlikely to win the feminist vote while she continues to rely on her family's musical muscle, she drops a broad hint as to future plans when the men are mentioned. "They've added so much to the tracks I've written... but I'd certainly like to work with other people. As we have our own studio now there's more chance to do things like that."
So, will she make the Most of things without Mickie? Can she still pop (or bro')? Will the new outfit stand the strain? Make up your own minds by listening to her new LP. Hear the call of the Wilde. 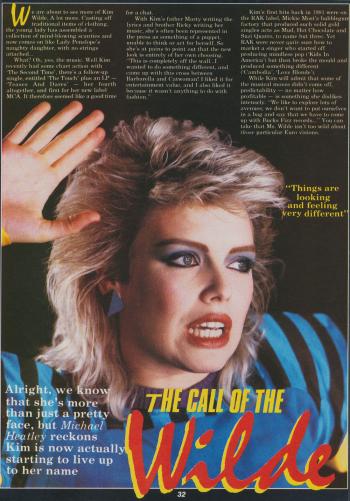 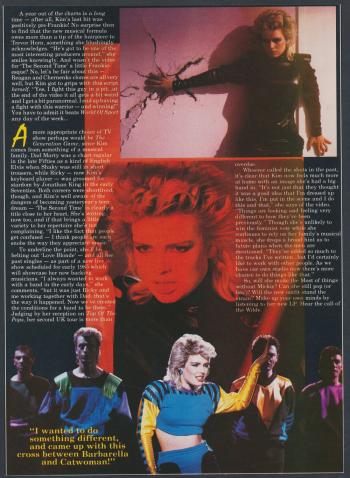