Ah, the magic of video - three minutes in the showing, rather longer in 1he making... That's something to bear in mind when first you see the clip for Kim Wilde's new single, 'The Second Time' since recreating the scenes of mayhem and destruction meant shooting a second, third and even fourth time to obtain the desired effect. For someone who'd finished work at six o'clock that morning, Kim seemed commendably eager to explain the video and the new image that goes with it.
"I wanted to do something that was very different... we talked over some concepts and came up with this cross between Barbarella and Catwoman; just for sheer entertainment! In the video, the room you see me in starts off as a very tacky motel room, as the lyrics say. Then it starts to disintegrate, and at the end it becomes holocausted as a result of my powers. I come across as very powerful, a bit of a weird chick reaHy ..."
Michael JacKson, you have a lot to answer for!
I'm assured the video's plot bears no relation to the fact that its star has recently broken with Mickie Most and his RAK organisation to sign with MCA Records. Kim's none too keen to go into detail about the split after three years and as many albums, commenting, "We left RAK because we felt we could do better with MCA - that just about says it all, really."
Did she feel, though, that she'd had much control over her image and music?
"We had a lot of control," she asserts, "but just felt the need for fresh input and ideas." The 'we' in that masterpiece of diplomacy is insignificant, since Kim's music is a Wilde family affair; her Dad, Marty, writes the lyrics while brother Ricky pens and produces the musical side. So unlike most RAK acts who flopped dismally after leaving the label (Smokie and Mud, to name but two), Kim's got few writing and production problems to contend with. Her new image, though, is centuries away from the Blondie-clone pouting on the cover of her first album. Yet the music had undeniable appeal: 'Kids In America' , her first single, had all the hallmarks of that classic RAK bubblegum sound, from 'Can The Can' to 'Tiger Feet' , that had made the mid-Seventies progressive rock era almost bearable. Much to my surprise, though, I'm informed that this was pure coincidence. "We recorded that whole album before we even set foot in RAK Records. That was probably why Mickie wanted us because maybe he felt we would fit in the RAK tradition... I mean, I loved 'Tiger Feet' and all those pop records, but I didn't realise they were on the label until some months later."
So the question remains - why the change?
Kim puts it down to the Wildes having their own studio, something which has encouraged her to start writing herself. "Things started looking and feeling very different to how they had done previously", she reveals, "and we kind of got off the merry go round of hit singlesville and got onto more about music." Ah-ha! But are they necessarily different things?
"No of course not, but at RAK it was obviously a primary objective. It limited Rick 'n' dad's writing a bit; they were thinking in a particular way about music instead of opening up - it made them feel restricted, I think."
The Wilde bunch's way of working had always struck me as unusual - let's face it, at a time when the generation gap has usually reduced father-daughter relations to "What sort of time d'ya call this?" and "You aren't going out dressed like that" Kim's old man was putting some mildly suggestive words in his young daughter's mouth. One case I brought up was 'Girls', the double A-Side to 1981's Water On Glass' , whose lyrics depicted a rather predatory young lady most fathers would never approve of. "I know what you're saying," admits Kim candidly, "and believe me, it's very difficult for me sometimes to understand this person I'm working with who's my father, writing a song about some guy dragging himself out on his knees after a good seeing to by some hooker... But his imagination is there; he can understand or imagine or relate to what it's like in his own way." Well this was a guy who had a big hit with 'Bad Boy' back in 1959!
Back to the present time, then and 'The Second Time', which combines another rather risque lyrics with a production and arrangement that is, frankly, very Frankie. "It's certainly influenced very much by Trevor Horn", Kim agress unashamedly. "He's got to be one of the most interesting producers around." And the lyrics? "When my Dad wrote the lyrics they were quite dirty really... but there are so many other things that come into it as well, and it takes on different meanings."
A loaded question: can Kim relate to everything she's sung? "Most things, yeah..." she replies thoughtfully. "But I'm not talking about a personal level, in my life. There's so many ways I can relate to a sojng, the lyrics are kind of one of the instruments, and my voice is another one, and it's like creating a little drama each time."
With the new album 'Teases and Dares', scheduled for release next month after the anticipated success of 'The Second Time', we may yet see live venues holocausted by Kim's paranormal powers before long. "Definitely... next year", she laughs, her enthusiasm tempered by realism. "I'll probably be doing a European tour."
Don't be fooled by the photos - Kim Wilde can smile, and I have a feeling she'll be doing more of it. After all, success is so much sweeter the second time around! 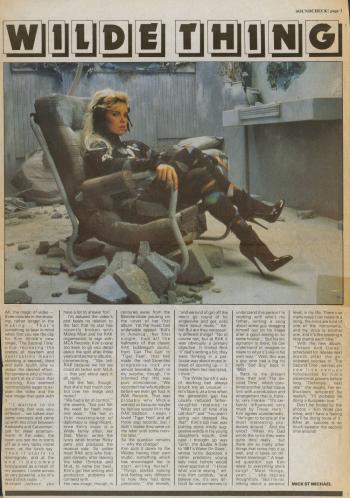