The Wilde family has left the proven hit formula that gave them nice hits like 'Chequered love', 'Kids in America', 'Cambodia' etc. We can only find the organ, the heavy guitars, the rough bassline and the driven drums on 'Janine' (from the fourth album). Kim Wilde wanted to start doing some things herself, helped out with the production of her youngest long player 'Teases And Dares'. 'The Second Time', the single taken from the album, testifies this new approach. It's the track in which brother Ricky uses his synthesizers in a pointed way. The other songs on the album are not very appealing, with farfetched intros followed by a wall of sound taken from the newest keyboards.

The girly voice of Kim sounds sophisticated and characterless. Kim Wilde wrote 'Shangri-la' and 'Fit in' herself, two simple songs but certainly good enough for this flat longplayer. The sleeve shows Kim at her most beautiful, the record does not fulfill this promise.

Father Marty and brother Ricky brought boring and mediocre material. In short, this longplayer, released at the end of 1984, won't give Kim any hits in 1985. The song 'The Second Time' does not succeed in achieving hit status. Try it again, then! 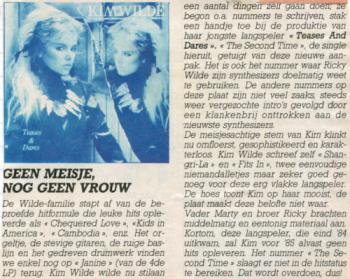 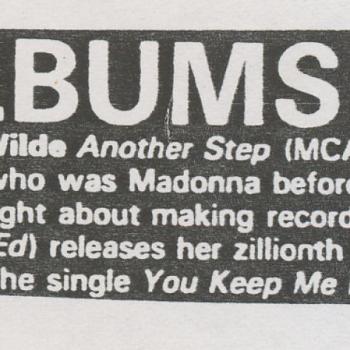 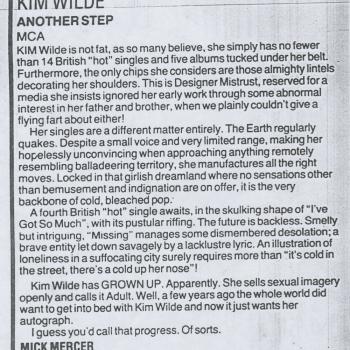