Primitive, provocative today. The "pop lolita" has become a woman more confident about herself and her abilities.

On the musical scenes, Kim Wilde appeared to be in great shape. It was 1981 when, with the song "Kids in America", she conquered the international charts, beginning with the most difficult to climb, the American one.
To stir up curiosity around her, two things were enough: her last name and the incredible sex appeal. English, daughter of Marty Wilde, rock star of the 1960s converted after the composition, Kim was on stage with a smooth and honest face, a shadow of mystery in the blue eyes and sensual lips perpetually pursed. And the tall, slim girl dressed in black dresses "embellished" by metal studs, as the dominant punk wanted. She was only a twenty-two-year-old, seemingly rebellious and timid child, who answered questions from curious journalists with monosyllabics.
It was such a magnet to draw the most obvious definitions in these cases: "perverse lolita", "blond puppet", "wild Marilyn" and away from this step. Labels that she seemed to accept with disrespect, defending themselves with phrases that sounded falsely naive: "In everyday life I am not that. This is an image I need to present myself to the public to conquer it. In short, today it takes a look aggressive if you want to sell discs. "
Then, in collaboration with his father and brother Ricky, keyboardist and guitarist of the band who accompanied him, I realized "Cambodia" a single energetic, dealing with a socially serious problem that has always been the war. Kim committed, then? No. "I sing for boys of my age," he said, "but I do not want to bring any messages. I think music is just another thing: essentially, fun." And he added: "I come from a wealthy family, I grew up without economic problems, I'm a serene, free girl, I'm a frequent person of all kinds, without regard to their social class, People only care about the human aspect, Sincerity, "Cambodia" is a song from the busy text, but my father wrote it. He is more sensitive to certain things, since he did not have a penny, he Struggling to become someone ... "
Kim is different today. Over the years he has continued to sing, his records have been critically acclaimed and public. But far from getting hired on these results, she has grown up in her desire to become more aware and participate in her work.
Tired of being just a voice, a coated presence, has worked so hard and hard to give a personal impression of the things she performs.
And the results have come true in two incisive and electronic albums: "Catch as catch can", and the recent "Teases & Dares". And immediately, Kim has become the aggressive, provocative, provocative, rebellious rocker that her image, unchanged or almost from the beginning, lets him guess. Only now this image has become sincere.

She learned, with the inevitable help of her father, to write the lyrics of her songs, which speak of a reality made of daydreams and close-knit rabies, just as all the young people of today live. And now she is sure of the questions of the curious who want to know her better, know who she is, how she thinks, "I'm tired of being called an exciting blonde. And a silly label that stops at the appearance. It matters, of course, but it counts much more than what is to be said.The work I've done in these years has naught me. Turning the world to present each time in front of a different audience has made me understand many things, find out reality And I assure you that hard work, up to forty-eight hours a week, is divided between concerts, recording room, promotion and production of lyrics, but I can certainly not complain, especially if I think of the millions of unemployed who are in I am a privilege, I fully understand it. I succeed, and I get it with the job I like the most, the only one that makes me feel really and ultimately myself: the music. "
And back to a topic that now makes you really angry: "Problems? Of course, it's hard to get the boys out of the boys if you're a rockeuse, but I've learned not to stand in front of these things. I finally found myself. " 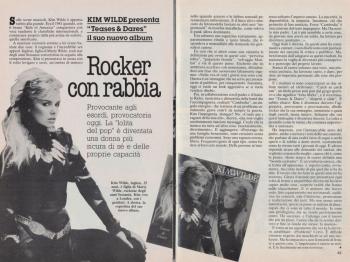 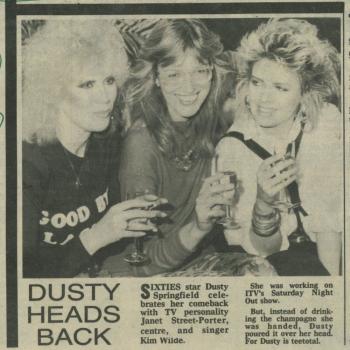