Baby, it's getting old outside

"Glad to see you all coming out to support us guys and gals doing glorious work for charity,'' joked Nick Lowe. ''Which, of course, we don't like to talk about.''

Charity and pop are cosy bed-fellows from way back, but Tuesday night's benefit for the City and Hackney Area Health Authority marked a new direction. There can be no better indicator of rock's advance into middle-class middle age than the sight of stars turning out to benefit their local hospital's maternity unit. Not so much the worldwide satellite link-up as Rotary Club rock.

Despite Nick Lowe's quip, Jools Holland, Midge Ure, Kim Wilde and the rest were clearly there out of the kindness of their hearts. Few album sales would result from the evening, nobody had a new single to plug, there was no danger of being photographed shaking hands with the Princess of Wales. But this was an opportunity for them to enjoy themselves; to do, Midge Ure said, ''some things we wouldn't normally dare''.

It began with an acoustic set from Nick Lowe. In his elegant navy suit and grey bouffant hair, Lowe looked more like the City and Hackney's consultant paediatrician than an erstwhile pub rocker. But nobody would like their newborn handled the way Lowe wields his guitar. He has a thump, twang, whack technique which, even on an acoustic guitar, can rattle rib cages in the stalls. Though he was surrounded by more guitars on stands than might be found in Nigel Tufnell's dressing room, most of them weren't for playing. Lowe used only one to run through a few ''old baldies''; ''Cruel to be Kind'' drew a whelp of recognition from a member of the audience in pin- stripes. He then took to an electric bass, ''so as not to let us think he was an old folkie''. This was for a number which contained the best lyric of the evening: ''Do you remember Rick Astley? / He had a big fat hit, it was ghastly.''

Lowe then gave way to the real stars of the gig, the roadies. For a quarter of an hour they hit drums and tweaked guitar strings while the audience listened to the Chimes' greatest hits (both of them) played over the PA.

After the break, Midge Ure appeared, heading a super-ish group (Mick Ralphs, Simon Kirke, Michael Kamen and some geezer from Foreigner). Ure is seasoned in making the charity ball roll; his CV includes organising everything from the Prince's Trust to the Mandela Birthday bash, not forgetting the big one. But in front of an audience of Hackney hundreds rather than Live Aid billions, he looked decidedly relaxed, performing a Peter Green instrumental, which allowed him to stray up his fret board and pull axe-hero grimaces. It proved, as he himself suggested, that ''shit, he can play!'' He was then joined by Kim Wilde, who announced she was delighted to be in the theatre where her mum and dad ''used to get it together in the dressing room''. This unlikely mixed-double did a karaoke romp (''Tracks of My Tears'', ''Wonderful World'' and ''Dancing in the Street'') which would have passed as rousing were it not for what was to follow.

Jools Holland usually performs with an ironically titled Big Band (there are two of them), but here the roadies spent an age setting up microphones, rows of chairs and (a new twist for a rock gig) sheet-music stands. Jools arrived with a supporting cast of 17, dressed in Hawaiian shirts, which he called the Deptford Dance Orchestra. Beginning with an appropriate number, ''Let the Good Times Roll'', theirs was a uniformly fabulous performance. As the Dr John, Professor Longhair and Duke Ellington numbers poured out, the band took turns, Glenn Miller-style, to solo; each one of unimpeachable quality. But like the Tottenham footballers who know that their best efforts can be made to look mundane by the twinklings of the genius in their midst, the Deptford boys were constantly upstaged by Jools, the Paul Gascoigne of the keyboard. With his long, bleak, dead-pan face, wrist tendons of reinforced steel and an inability to sweat which borders on the pathological, he is the apotheosis of cool, a dodgy pair of oxblood Chelsea boots notwithstanding.

He finished with ''Shake Rattle and Roll'', Kim Wilde in a black ball-gown providing the vocals and most of the audience jiving in the aisles. ''At this stage,'' he said at the end, ''we'd normally go off stage - but it's so difficult getting all of us off, that we'll just stay here and do another, if that's all right.'' All right? Jools proved so popular that, if he were prepared to dedicate himself to the cause, they could fund the entire National Health Service from his benefit gigs. And still have enough left over for a few pints. 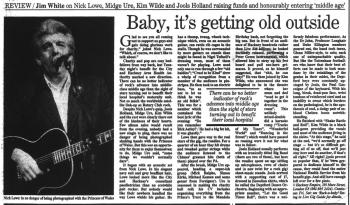