On October 30 the stage at one of this country's most revered venues, the Royal Albert Hall in London, will see a long-awaited moment in musical history.
Rock'n'roll star Marty Wilde will sing live with his wife Joyce, one of the original Vernon's Girls, their songwriter/producer son Ricky, and their two daughters - Kim, who at 33 is Britain's most successful female solo recording artist, and 15-year-old Roxanne, who is just about to start following in their footsteps.
It will be a one-off occurrence in the upcoming series of Solid Gold Rock'n'Roll concerts and the biggest tour Marty, who's now 56, has taken part in since his heyday in the Fifties and Sixties. The family appearance marks a major change of policy for the incredibly talented Wildes.
"In the past I've been offered some quite big TV deals to perform with my family, but 1 wouldn't do them because l thought it would be boring. I didn't want us to appear like a showbiz Osmond-type manufactured, all-smiling, all-dancing family," explains Marty, although on his forthcoming album Solid Gold he and Roxanne sing the old Donny and Marie hit, I'm Leaving It All Up To you. And Kim is considering recording her first-ever duet with Marty on her next album.
Kim and Marty have previously performed on stage together only once, since she became a star in her own right, and that was at a charity concert. "In the past, when I was trying to my own identity, it was always taboo for me to work with my father, but I feel we can do anything now," she says.
The concert will also mark the public debut of Roxanne for whom Marty is already predicting a glittering future.
At this exclusive Wilde family interview and picture session with HELLO! at the family's recording studios in Hertfordshire, it was touching to witness the obvious respect and affection which they have for one another.
"The only thing that worried me about Kim going into this business was that she might get badgered by the media. I'm sure the likes of Jane Fonda and Janet Jackson got exactly the same, but it worried me initially," says Marty, who had 14 hit singles between 1958 and 1962. "I've had a few free cab rides on Dad," Kim admits. "The great thing is that blokes like him too, not just women, and 1 have this great sense that he's loved by a lot of people.
"But not everyone's nice all the time. Mum and Dad were always supporting Ricky and me when we were at school and warning us that some people can get jealous. And now, of course, we're having to do the same thing with our younger sister and brother," she adds, referring to Roxanne and Marty Jr, 13. "I got in a few punch-ups over Dad at school," admits Ricky. "And I had a few scraps too," says Kim. "We just want people to accept us as we are, as normal people, and they don't always see us that way," explains Joyce, who now manages both Marty and Kim.
Marty is adamant that Kim never receives preferential treatment within the family, but says: "I thought Kim would be a big star from the moment I first saw her on Top Of The Pops. When 1 finished watching the video I said, 'Game, set and match!' That was it."
Ironically, Ricky, now 32, was the original Wilde child groomed for stardom. But when Kim sang backing vocals for Ricky in 1981, it was she who suddenly became the star and Ricky decided to write and produce instead. He sat down and wrote Kim' s first hit Kids In America that night and most of her other records since, often also co-writing with Marty. Which is why, he insists, he has never resented her success.
"The chemistry between us is such that jealousy doesn't come into it," says Ricky, "because we are all involved with each other as people and not just in a business sense. That's what really binds us together and makes us really strong."
The main strength of the Wilde family is probably Marty and Joyce's marriage. It's been going for almost 35 years and remains as solid as ever.
"One of the greatest gifts you can give to your kids is continuity. Chopping and changing around is disruptive for kids, so 1 think any sort continuity is great, and especially if it is founded in love," says Kim.
Ricky, who has been married to his wife Mandy for ten years, agrees, just as he does when it's suggested that the family showed great mutual support when Joyce suffered a series of miscarriages.
"That was a pretty upsetting time," he says. "But, a the end of the day, little Roxanne and Marty Jr were born and they're both brilliant kids."
"All of us have been strong for each other at different times," adds Kim, who is reported to have helped her father recover from an alleged breakdown which Marty explains was just depression in the Eighties. "Although we come across as very happy strong and tough we are quite vulnerable people - there's a chink in everyone's armour."
Kim is still upset by the publicity which surrounded her brief romance with TV presenter Chris Evans of Channe1 4's The Big Breakfast, earlier this year. Not only will she not talk about that now, she has vowed never to publicly discuss her private life at all anymore: "Anyone who really wants to know about what I'm thinking can listen to it in my songs."
When asked how she thinks she would have fared without her family to help her career, Kim says: "I don't think I'd have enjoyed it as much. I might not have still been in it by now. Probably I'd have got run over by unscrupulous people and would have become very disillusioned." 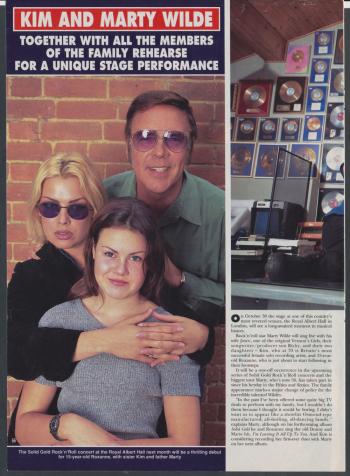 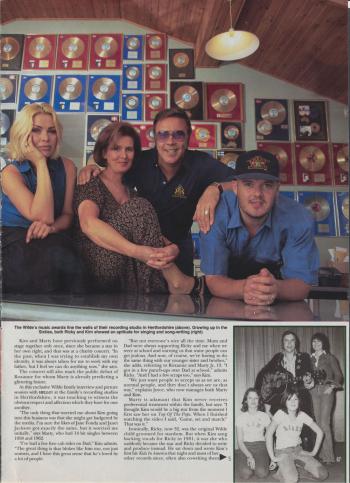