Everyone knows who Kim Wilde is. The majority of women want to look like her and men would like to date her. The image is soft pop queen, glamorous, sensual, fashionable and she releases lots of singles.

Not many people would realise that Kim Wilde has actually released nine albums which have sold over six million copies world wide. She has also released 26 singles (which has sold 11 million) which is not too bad to have under your belt either.

After an amazing twelve years in the music industry Kim is finally releasing a Greatest Hits album. We haven't heard much of her over the past few years, but this does not mean she has been idle. Kim has released an album a year, which may have not done big things in Australia but have seen success in Europe and Britain.

So is she happy with the way her career has progressed so far?

"Yeah, I really am, especially because of the Greatest Hits coming out this year, I feel that it kind of warranted it after 13 years of not having one. I'm really chuffed - have the greatest hits then maybe take a departure from what we've been doing so far and maybe try something a bit different on the next album. I'd like more of an acoustic sound, more of a live sound."

In any career that has spanned a time period of twelve years there is bound to be a time for reflection to think about things done or not done.

Kim once said, "After Kids (Kids in America, her irst hit single) there was pressure to get another single done, get the album recorded, do lots of promotion all over the place. It never stopped, and it's never stopped since really."

With the Greatest Hits being released I feel now is the time to ask if there is anything she would change.

"The only thing I think I'd wish I'd done more of, because I'm doing more now, is live... I think the only time I released I loved it was when I was touring with Michael Jackson it was over a two month period and we did over 30 shows. In retrospect I should have plugged away at live work. But that's the only thing I think."

There is no better person to ask about longevity in the music industry, which is like fashion - society picks up on music fads just as quickly as they toss them away. At the moment it is 'grunge' music, every band on the up sounds frighteningly the same. Tomorrow the sound of the moment will be something completely different. What does Kim Wilde think is the secret to longevity in the music industry?

"Your attitude really makes up a lot for longevity. That, and working with a great team. I think ultimately it is an attitude", she states.

Probably attitude and a willingness to keep an open mind. Every band has their 'own' sound, but do they always want to sound the same. That's when a song sounds more like a mathematical formula than a piece of creative talent. Kim wants to take the Greatest Hits album as the end of a chapter and the start of the new, so where would she like her music to head in the future?

"I'm completely open. I was sitting in a rock cafe last night listening to Metallica and Nirvana and thought 'I want to be a rock chick', and I listen to Aretha Franklin and SWV and think 'I want to get into soul' and then I think, 'Right I want to write a nalbum about love and something deep and meaningful'. I don't know, what do you do with music? It covers so many different genres, it's so hard to pick one and say that's where I'll stay', Kim says.

Kim Wilde is about as down to earth as you can get in an industry of amazing egos like Terence Trent d'Arby saying he is a genius and John Lennon saying he was bigger than Jesus. I ask Kim what the high point of her career has been and her answer is as refreshing as everything else about Kim Wilde.

"I think with Michael Jackson. Some nights you're in front of 140,000 people, and even though they were there to see him, they were really into what I was doing. It just made me realise there is room for everyone. It doesn't matter, you don't have to be as big as Michael Jackson or Madonna to have people really love what you do. The most important thing is to really enjoy what you doing and value what you do", she states philosophically.

Talking about people with humungous egos, what does Kim Wilde think about Madonna?

"I've always really enjoyed what she's done. I think initially, when she first started being successful years ago, I was ever so jealous. It took me a long time to just appreciate what I do for its own sake. I'm me and I'm doing what I do and I'm not her and she's doing what she does. I just had to kind of grow up and realise that. Once I did it was fine."

No egomaniac here, which just goes to prove that a person can be talented, successful and not be totally arrogant as well, and did I mention beautiful? 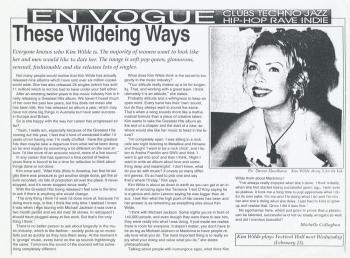