If you've been to India or China you'll no doubt have been struck by the differences between their food and the dishes served in any of the tousands of restaurants and takeaways in our own towns and cities. It appears that the food served here has not only been designed to satisfy the British palate but bears little resemblance to the genuine article. It may be too late to expect truly authentic Indian and Chinese food to become popular in the UK because in general we have become accustomed to Anglicised versions. It's either pack your bags and off to the Orient or trawl the treets of our cities in the hope that you'll stumble across the odd dish that's true to it's origin. As Thai food gains popularity in this country we ask the question - Are we tasting the real McCoy or has the food already been westernised on its journey from the east? Most of the ingredients used in Thai cooking are readily available in the UK so there should be no reason why true Thai food can't be served here. Of course for the Londoner the choice will always be wider. Notable eateries here include Vong in Knightsbridge (actually a fusion of French and Thai), the Nipa Thai at the Royal Lancaster Hotel and Esarn Kheaw in W12 which specialises in north-east Thai cooking. The best way to establish whether Thai food here resembles Thai food there is by first hand comparison. With a little arm twisting we persuaded newlyweds Kim Wilde and Hal Fowler, both regular Thai food diners, to forsake normal honeymoon activities and report on the dishes and delights of Thailand and it's islands.

Imagine my delight when GS Magazine tracked me down and made me the offer of a lifetime. Any destination of my choice. Take as many friends with me as I wanted. Stay for as long as I could possibly bear. Eat and drink whatever took my fancy, no holds barred. Even better still - write the kind of article I wanted to write. This was the sort of deal I'd only ever dreamt about. I had been given my first Carte Blanche. In fact, it was such a good offer that even when GS told me that I would have to pay for everything I found myself in a position I could not possibly refuse!

As chance would have it this most generous proposal was mooted to me only days before a belated honeymoon with my wife of just six months We decided to kill two birds with one stone. We packed our bags and set off with no more than a guide book and two very big smiles to the sparkling islands of Southern Thailand. This country, once called Siam, really does have something for everyone - whatever you're into it's only round the corner. And, if you're like us, happy just to follow your nose and have little thought of the morrow this ot, blazing blue and green land can take you on a truly magnificent adventure.

Phuket was to be our first port of call. Within twenty four hours of leaving home we found ourselves on a large wooden balcony, raised high on bamboo stilts, in a mass of vegetation at the Junge Beach Resort. Excited and weary we watched the red, setting sun fall behind the coconut trees and bounce onto the inviting horizon line of the sea as we waited, like woles, for our first meal. Lemon grass and galangal first took hold of our pallets while the coriander root prepared for its assault on our taste buds. Barely seconds after savouring these refreshing flavours the chilli kicked in with an almighty bang making it clear and in no uncertain terms that it was to take first place in the Tom Yam Gung soup. meanwhile, the ridiculously obese prawns at the bottom of the bowl had saked up all the ginger, lime leaves and garlic they could manage and cried out to enter into the fray. This classic Thai dish went where no dish had gone before, challenging all the senses as the ever changing combinations of its simple ingredients danced courageously around our mouths.

Food is everywhere but everywhere. The famed Pad Thai Noodles take minutes to cook and are readily available on every street. Ripe green coconuts permanently wait on standby to quench any thirst with their exquisite, sweet milk. Tiger prawns, oysters, clams, crabs and lobsters sleep on vast mountains of ice next to fragrant, fresh fish. Steamed rice steams while gorged pineapple and fat watermelon lie ready to pounce on their next victim. It's all here, it's all fresh and it's all tip top ticket tasty.

Thailand has been open to tourism for only a couple of decades. However, in that time, development has reached almost epidemic proportions. The entrepreneurs whiffed the unmistakable smell of money and went to work twenty four hours a day. Hotels and restaurants swamp many towns and ancient islands with their capitalist weight. But fear ye not - if you look in the right direction paradise is still clearly visible.

Accommodation ranges from primitive bungalows costing £1.50 a night to Fantasy Island style, luxury villas weighing in at around £2000 a night. We decided to aim for the middle mark and spent most of our three weeks in £35 a night bungalows. Sounds cheap and cheerful, doesn't it? Not a bit, £35 notes bought us spacious double rooms with air conditioning with the full en-suite - shampoo included. Swimming pools and private beaches, waiters in white suits, fresh flowers and happy hour cocktails all thrown in.

While we're on the subject I think I should expand. It's beer, beer, beer all the way. Singha beer, the oldest and most popular, packs a mighty punch with its 6% making it the perfect compliment to a Thai dinner. For the hardier of players it has to be Mekong whiskey - a 70 proof molasses based spirit capable of irreparable damage. More than satisfied with the beer we kept well away from the firewater but much enjoyed watching its effect on those who didn't.

If the thought of all that chilli and local whiskey doesn't hit the spot for you, rest assured - Italian, French, Japanese, Chinese and even English cuisine are all on the menu. If you search really hard you might even come across a bottle of Babycham or a can of Stella. It's all tables and chairs, knives and forks in Thailand so you don't even have to worry about sitting on the floor to ea tor taking a refresher course in chop-stick technique which is how I imagined it to be. The service is friendly and familiar often disguising the hard work and long hours that the Thai people put in to keep us tourists smiling.

Of course, all the glorious food is greatly enhanced by the magnificent landscapes making one wonder whether you can have a true Thai food experience outside Thailand. Thai restaurants continue to pop up all around Britain as more and more people become hooked to the scintillating sensation of the food they have to offer with the added benefit that it's all extremely good for you (as long as you go easy on the chilli). Thai restaurants in Britain can be expensive but do provide authentic dishes. Another advantage is the relative ease of creating these dishes in your own home with all the ingredients being readily available in supermarkets. It's a fast growing industry with huge potential. Who knows - another five years and I wouldn't be surprised to find Thai fried noodles being cooked up in fast food stores and market stalls everywhere.

For my single self, I'm a bit of a 'when in Rome' kind of chap and can't think of anything better than resting my back against a coconut tree on a small Thai island with a platter of sea food in my lap, watching the reflections of the awe inspiring rocks dance on the surface of the beautiful, emeral green sea - heaven.

Hal Fowler is an actor and freelance journalist. He is currently playing the lad in the West End production of Martin Guerre. 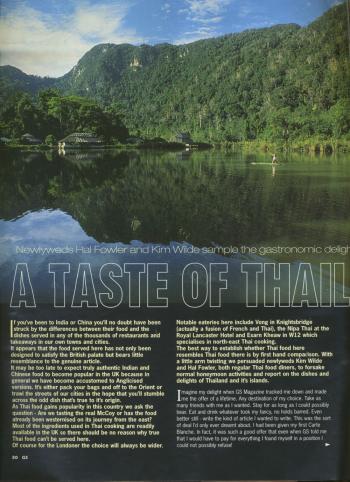 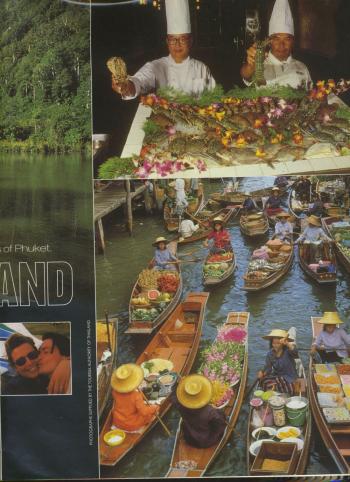 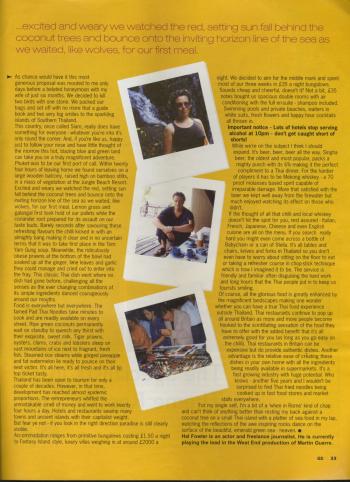 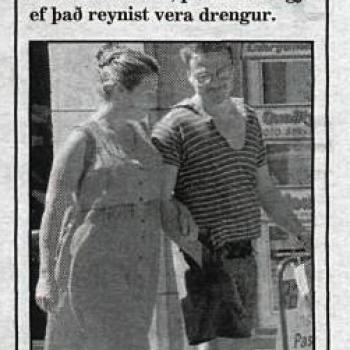 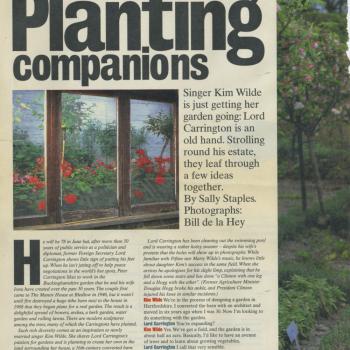 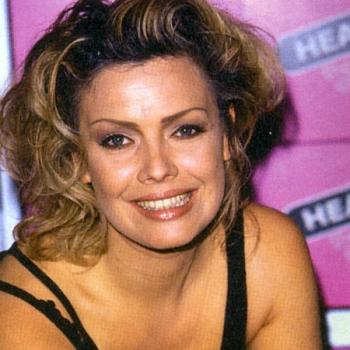 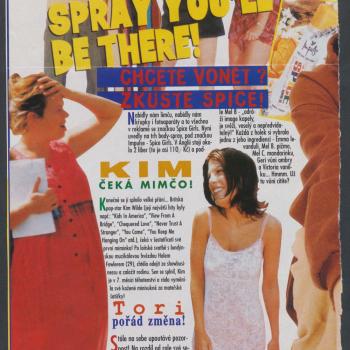 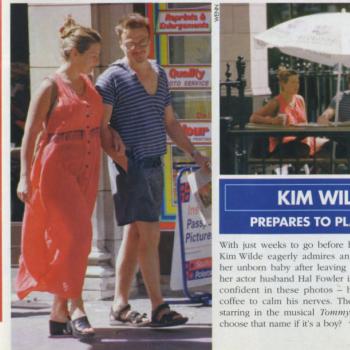