Revelations: 'It was just a tiny kiss to the lips'

'I met Kim Wilde when we worked together on the musical Tommy. I went out of my way to avoid her; only because everybody else was making it their job to be around her as much as possible. However, during rehearsals there was a limp conversation about who would have enough courage to as kKim out for dinner. I'd spoken to her only three or four times but I decided I'd go and ask her, rather than listen to all this talk. So I strutted over the stage: "Would you like to come out for dinner with me next week?" As bold as brass, even though I'd never done anything like that before. She made me squirm for about a minute, her revenge for how I'd treated her, until finally she agreed, to the horror of the boy playing Tommy, who ran over and shouted, "You can't go for dinner with him." In character as the bully in the musical, I told him, "Get lost or I'll let your bicycle tyres down."

We had a beautiful dinner at the Ivy, talking about general things like favourite childhood walks; it was a very easy chat. It wasn't two actors comparing CVs but family stuff, pleasant but meant conversation. We clung to the seats because we didn't want to leave. Finally, they booted us out. I didn't want any time stuck uneasily on the pavement together, so I offered to find her a taxi, and one arrived straightaway. I really wanted to suggest that we waited for the next one, and I suspect she wanted to squeeze a bit more out of our time together. As soon as she climbed into the taxi we exchanged a kiss through the window - a tiny kiss to the lips, just a moment longer than a social kiss. Off the cab went, and like a cartoon I jumped into the air. I was completely taken aback. It was unpinpointable, not a lust, or possessiveness or wanting or needing - just glorious cloud nine.

I had always been interested in writing, but I'd get very stuck and wasn't ale to finish anything. But when eventually I got home that evening, I sat straight down and wrote five lines of blank verse about the date. A brief, factual description about every stage, and at the bottom I wrote about "a kiss to be remembered". I decided to give it to her the next day. "You idiot", I screamed, "What do you think you're doing? This is just preposterous." I ripped it up and threw it in the bin, wrote it out again and once again tore it up, and finally went to bed.

The next morning I finished it for the third time, put it in an enveloped, sealed it and wrote "Kim" on the front. I hid it at the bottom of my bag and felt like an SAS man. I'd reached Stage 2 - the poem was at the theatre. I thought about handing it to the stage doorman or slipping it under her door, but finally I gave it to her without saying a word. I thought: "That could be pinned up on the notice-board by the end of the show for everybody to laugh at." I was petrified, but comforted myself with the thought that it was too late to retrieve it now.

Over the ensuing months, my side of the relationship developed through short stories and blank verse. I found it a lot easier to communicate this way. I was well aware that Kim had a bit of a chequered past; so I wasn't about to pick her up and whirl her around and chuck her into the gutter. Then pen and the page gave me the perfect chance to be honest and show my desires and needs. Because those five lines seemed to set it all off, I wrote more and more. I'd never put so much faith in my own written word before, but from that moment on I believe in my ability, because it had won me the woman I loved.

We married in September 1996. I'm a great believr in marriage, because my parents are still obviously madly in love. This family unit has given me all my security and strength; I never get het up about anything. My father always said: "If you have any doubt you shouldn't enter into it". With past relationships there was an absolute knowledge that they would not become serious. Therefore they could be unsettling and distancing, because one does not want to lead women on.

The freedom I get from being married to Kim is immense; it's far less claustrophobic than being single. There is something trapped about getting your identity from your career, because there are expectations about the next type of role you should do. Now I know exactly what I'm doing and I have a great sense of restfulness. All my writing stems from my everyday life with Kim. Since meeting her, I've completed a book of short stories, a novel and a screenplay, as well as going to Sri Lanka for the movie Jungle Book 2.

I'm currently in Martin Guerre, playing the man who pretends to be Martin. The musical is about identity, and how you are who you are only by other people's definitions. I can relate to the story because my marriage has given me a new sense of belonging. 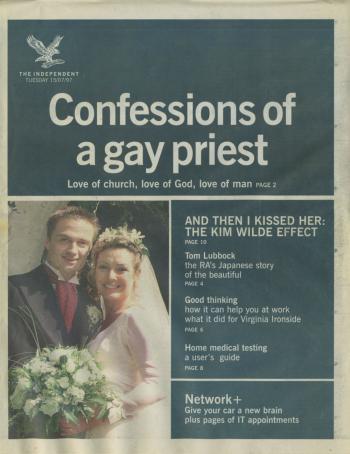 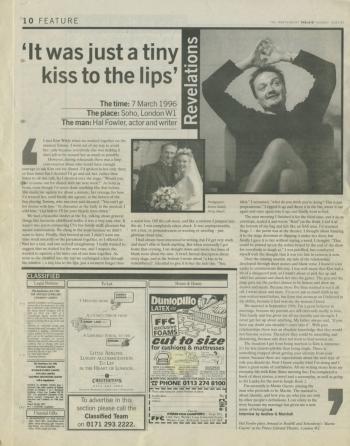