Linda Evans from 'Dynasty' with her enormous shoulder pads, Daisy Duke in her jealousy-arousing hotpants and the dirty dancing Jennifer Grey. Those who remember them, sung along to Kim Wilde and Cyndi Lauper without a doubt. And how are these Ladies from the Eighties doing these days? And especially... what do they look like now? Look and compare!

In the 80's: The beautiful Kim Wilde is the idol of girls and the dream woman of the average adolescent male. The single 'Kids in America' from her debut album 'Kim Wilde is a mega hit. Gold and platinum albums come in from all over the world.

And after that? Her musical success diminished, but Kim does get a leading role in the musical 'Tommy'. The biggest part of the nineties she is out of her job and concentrates on her family. Sometimes she performs on stage for some extra pocket money.

Now: Kim (41) has hung her microphone in the trees. She is now the British Rob Verlinden in the BBC-programme 'Graden Invaders'. "I drive very dangerously because I keep looking out for plants along the road. I get frustrated whenever I can't think of their names." 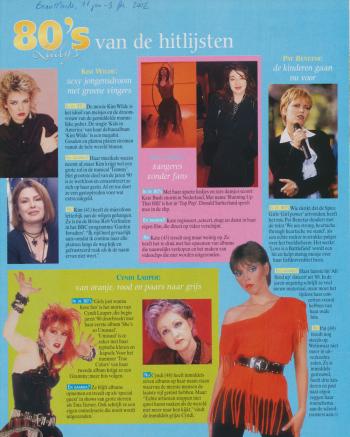