Growing up in the hit factory

Kim Wilde sings the praises of her childhood home in Greenwich, where pop music was part of the furniture.

My dad, Marty Wilde, was pretty busy being a rock n roller when we moved to Greenwich, in southeast London, in 1962. His career look off in 1957-58 and his heyday was around the time be got married and had me. We moved from a flat in Chiswick, on the other side of London, to a semi-detached house in Eastbrook Road. built in the 1940s or 1950s. Dad was often working, but I never fe!t that his life was glamorous. When he was at home, he'd always pick up a guitar and sit in the living room writing songs. Mum would often sing with him. Dad wrote several hits while we lived there, including Ice In The Sun for Status Quo and I'm A Tiger for Lulu.

I remember chatting to Lulu on the phone when I was about five. She was a huge star and Mum and Dad were doing a pantomime with her. The radio was on all the time and I used to listen to all these amazing songs that were the soundtrack to our lives: I vividly recall hearing Cilla Black singing Anyone Who Had A Heart and thinking it was wonderful, and the Beatles' Strawberry Fields. It was a great area as there was lots to do, and Mum and Dad had some good friends. We were just up the road from beautiful Blackheath and we'd go and sail boats on the little lake there. We also used to play in the playground at Greenwich Park. Our garden was 70ft long, with borders down the side, grass in the middle and an apple tree at the bottom. It wasn't one of those romantic gardens, we just made the best out of a bit of grass. My earliest horticultural memory is of planting a tulip bulb in a red bucket; I took it to Brownies and they were so impressed they gave me a badge for it.

The living room had a bar, a long coffee table made out of a slice of wood, and black leather sofas with silver galvanised bits on them. Mum gave up work when she had us to become a housewife and mother. She always seemed to be up to her eyeballs in the small kitchen washing our clothes with the mangle and a really ancient washing tub-type thing. There were two bedrooms and a small bathroom; I shared the room overlooking the garden with my younger brother, Ricki, and we used to wreck our room, which drove our parents crazy. We had lots of paintings up on our bedroom wall - one I did was of a phoenix coming out of the flames, I remember Mum and Dad's bedroom a little bit -  I would open up their wardrobe and see Mum's wedding dress cascading out. I seem to remember that there were ghostly undertones, a funny feeling in the house. Mum and Dad subsequently said there were spooky goings-on and that they had felt a malevolent presence. Once they said they heard somebody banging hysterically on their door in the middle of the night - they went out, but there was nobody there.

I remember developing a liking for the mortar in between the bricks of our garage. I used to scrape the mortar off and eat it - I enjoyed the taste of it.

Just before we moved, Dad's fortunes changed quite dramatically, from somebody who had been ripped off quite considerably during his pop career to somebody who was making a lot of money through publishing because of his songwriting ability. Dad got a huge publishing cheque for writing his hits, so it was like, "Wow, let's do something different". I left the house in Greenwich when I was eight. One minute we were in a semi-detached in southeast London, the next we were in the quintessential cottage in Hertfordshire with a thatched roof and bunnies running around the garden. It was just like walking into heaven. 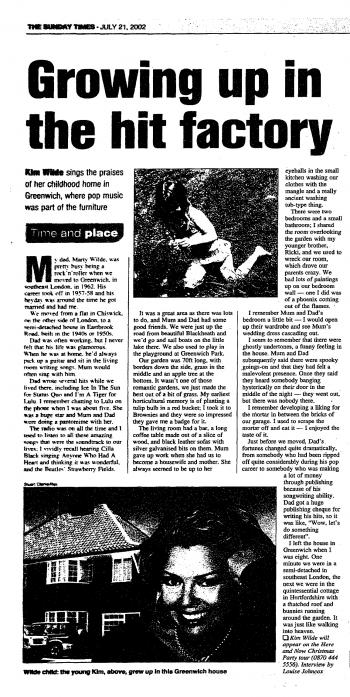