Try our celebrity quiz comes with a twist - can you spot the deliberate lie? This week singer and TV gardener Kim Wilde reveals all to Lina Das.

Kim Wilde, 40, had a string of top-ten hits in the Eighties and is now a television gardening expert. She is married to actor Hal Fowler and the couple have two children, Rosie, two, and Harry, four.

Who is the sexiest actor around at the moment?
John Cusack - there's something incredibly sexy about him. I like Woody Harrelson, too, because he's a superb actor and really cute.

Have you ever kissed in the back row of the cinema?
I've had loads of dates at the cinema and, of course, I snogged. That's what you're meant to do, isn't it?

Who wouldn't you sleep with, even if you were marooned on a desert island with him?
Paul Ross. Don't ask me why - we've never had a run-in. I just couldn't bring myself to sleep with him at all.

Who was your first boytriend?
A lovely guy called David who I went out with when I was 12 years old. He kind of broke my heart because he didn't want to go out with me any more. Many years later, I did a television show with Chris Evans and David was asked to appear on it because he was my biggest fan, apparently. It was lovely to see him again.

What attracts you to a partner?
A sense of humour and a lust tor life. If I look back on some of the men I've been out with, I can definitely say that looks have never been a priority, although my husband Hal is dreamy to look at and a lovely person, too.

What turns you off?
Men who sleep around a lot.

Where is the strangest place you've had sex?
In a car. Actually, that's not strange at all, is it?

Would you rather spend the day shopping in Harvey Nichols with your partner's credit card or spend the night with Tom Cruise?
Shopping. Tom Cruise doesn't look a whole bunch of fun and his interest in Scientology would definitely put me off. I can understand why Nicole Kidman looked relieved when they split up.

How many times a week do you make love?
Well, with two children, I'm fairly deadbeat most of the time. Harry always ends up jumping on the bed first thing in the morning just as things are starting to get interesting between Hal and me.

Do you know how many sexual partners your husband has had and is it fair to ask?
I've never asked Hal and he's never asked me, probably because it's boring and irrelevant. The number of Hal's past lovers is probably similar to mine.

Have you ever had a one-night stand?
I did once and I didn't feel terrible afterwards.

What's the worst sex you've ever had?
I was on tour in Australia several years ago and began talking to a TV producer in a bar. He ended up coming back to my hotel room and we started kissing. I suddenly came to my senses and thought to myself, 'This shouldn't be happening'. I made some excuse about not having got over my ex-boyfriend and would he mind very much if we just lay there and cuddled? Luckily, he fell for it.

Do you believe in love at first sight?
Yes, because it happened with my husband.

Is flirting with someone other than your partner harmless?
Mostly. I think being flirtatious is either in your genes or not and, anyway, you can flirt with friends as well as lovers.

What would be the first thing you'd do if you woke up and discovered you were a man?
Take my children to school and see if other mums fiirted with me.

Is infidelity ever forgivable?
I'd like to think that everything is forgivable, but I'm not sure quite how I'd react if Hal was unfaithful.

Would you be unfaithful if you could get away with it?
No, because I'd know, and that would be bad enough.

If you could spend the night with anyone famous who would it be?
Sid James. He would have been a great laugh but I wouldn't have slept with him, of course.

What's the sexiest film scene ever?
The one in Play Misty For Me when Clint Eastwood makes love to his girlfriend in the woods.

Can love last forever?
Yes, and I've found that kind of love with Hal.

And the lie is...
Kim would really choose to spend the night with 18th-century landscape gardener Capability Brown. 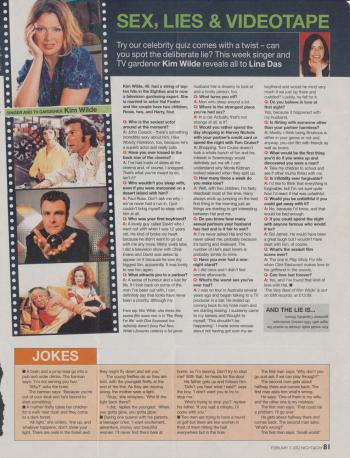