The Touch-N-Mow easy starting system from Briggs & Stratton, which is internationally recognized for its innovative design and its technological advances to make starting a lawn mower easier, is making its debut in Europe.

This Spring, Briggs & Stratton is launching a Touch-N-Mow promotional campaign that is targeted toward the European lawn and garden consumer. The campaign highlights the starting system which incorporates the power of a gasoline engine, the ease of electric start, without the hassle of battery maintenance. Simply prime the engine, push the starter lever and pull the blade control handle.

Aimed at consumers that use walk-behind mowers, the campaign incorporates several components including: a Touch-N-Mow spokesperson, Kim Wilde (pictured), print advertising, multi-language Touch-N-Mow oinformation (posted on European websites), and an animated Touch-N-Mow streaming video (coming to the European websites late April) that demonstrates the innovative system that makes starting the mower as easy as 1-2-3. Other components include a reader giveaway promotion in the U.K. and point-of-purchase advertising to promote Touch-N-Mow in multiple languages.

According to Eileen Scharenbroch, Briggs & Stratton's Marketing Manager for Europe, "Touch-N-Mow is an ingenious innovation. You have to try this system to believe how easy it is to use. It's definitely a 'Wow, this is great!' product."

The Touch-N-Mow starting system, which is found on the Briggs & Stratton Quantum and Intek engines, enables a mower to start quickly and easily. Touch-N-Mow also has reliability and safety as inherent features.

The 2-in-1 easy starting system has a patented spring-powered mechanical design that not only starts the engine, but stops it when you release the safety lever. The manual primer ensures easy, consistent starting. A five-year warranty gives the consumer power to start for the life of the equipment. A removable, safety lockout key prevents accidental starting of the engine during storage or transport of the equipment. 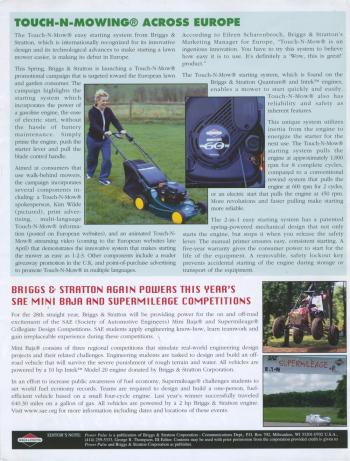