Wilde about the urban garden

Decking, foliage and a water feature could add thousands to the value of your property. A stylish and low-maintenance garden is just what city buyers want, finds Sarah Lonsdale.

"This isn't the sort of garden where you would come to drink your cocoa", says the singer turned garden-designer Kim Wilde. "This is much more a Jack Daniels and Coke garden."

The urban garden is the latest "must have" feature in city properties, along with stone floors, acres of glass and under-floor heating (radiators are so 20th-century). So when developer CYZ needed a designer for the external space of its new flats in Clerkenwell, who better to call in than Kim Wilde to add an aspirational touch?

The word "garden" seems inappropriate for her stark, geometric "outside room" of wooden decking, architectural plants and softly bubbly water feature. The fact that it is a peculiar rhomboid shape and jetties out over a warehouse at first-floor level, overlooked on all sides, only adds to its air of unreality. There is not a blade of grass or self-seeding perennial to be seen, which is just as well because it is difficult to imagine the owners of this voguish new development getting out the Flymo and weeding fork on a Sunday morning - even if they hadn't had too much Jack Daniels the night before.

Where once developers were content to leave the outside bare or simply turfed over, buyers now expect a seamless extension of the chic interior, complete with tree ferns, bamboo and other low-maintenance plants that look good all year round. Anyone thinking of selling their standard inner-city Victorian terrace with 30ft garden had better look to their laurels, too: a well-designed a garden, even one without a famous name attached, can add thousands to the asking price.

"A stylish urban garden can add as much as £55,000 to £75,000 to the value of a property in the £350,000 to 500,000 bracket", says Mark Coulter, a property consultant at the Clerkenwell-based Hurford Salvi Carr. "But, more than that, buyers have almost come to expect a good-looking exterior, and the property will be let down if all there is outside is a patch of grass with a few sorry-looking flowers around it."

It is known among estate agents as the "Alan Titchmarsh effect" - you are more likely to sell your city property if your garden has those vital urban ingredients: decking, clean geometric lines, evergreen foliage and some kind of water feature, preferably in glass or stainless steel. "It's got to be a space where potential buyers can immediately envisage themselves downing their gin and tonic after a hard day's work, but it mustn't make them feel that they are going to have to spend hours tending it", says Matthew Tinker, of the Kensington-based estate agency May & Company.

Accoring to a survey published by Halifax earlier this summer, a garden is now top of the list of househunters' requirements, with 30 per cent of buyers rating it as the most important feature in a property, above garage, ensuite bathroom and even central heating.

"In London and other urban areas, with space being at such a premium, a garden can add five to 10 per cent to the value of the property", says Emma Maker of the Halifax. "If that garden has been professionally designed to make the most of a small space, then that figure gets even higher."

"With property prices still rising, spending £5,000 on 'Ground Focing' your 20ft by 30ft patch could add £50,000 to the value of your home", says Matthew Tinker. "Looked at that way, it is a great return. Equally importantly, a good design with well chosen evergreen plants can extend the selling season of your property, from the April to October period to pretty much all year round."

Clever urban householders and property developers have cottoned on to this trend and garden designers are having a field day. Bowles & Wyer, which is very much in demand, has been busy designing and planting urbans gardens from Kensington to Highgatre, sometimes in tiny spaces once thought only good for covering in concrete and drawing a discreet curtain over when guests came to dinner. The firm created the roof garden at the award-winning Pavilion development in St. John's Wood, as well as 25 adjoining gardens in the restoration of an entire Georgian terrace in Kensington.

"From my point of view, the property boom has meant that clients have bigger budgets because they can justify spending the money", says John Wyer of Bowles & Wyer. Like Kim Wilde, he finds small city spaces exciting because it is possible to make a big impact.

"There are a lot of potential problems associated with designing gardens in cities", he says. "You have to deal with high walls, the fact that the plot is probably overlooked, that much of the space will be in shade ost of the day, and sometimes angles are very harsh. Very often our solutions will be more an exercise in graphic design than what most people understand as gardening."

Gardening purists may quail at the sight of the creation by Kim Wilde and her team at Stewart Landscape Solution: it is uncompromisingly urban and minimalist. But they will also be jealous that Wilde's succulent green leaves are safe from marauding slugs - unless there exists in Clerkenwell some gigentic wall-scaling variety.

One of the flats for which she designed the garden - a perfect match for the interior's grey stone flooring, pale oak finishes and mirrored mosaic tiles in the bathroom - has sold already. No doubt the remaining one, with one bedroom, will soon be snapped up (£350,000: Hurford Salvi Carr, 020 7250 1012).

If yours is the typical 30ft by 30ft town garden, you can "urbanise" it for less than £500. "The ideal materials are ones that have a modern, chic feel", says Kim Wilde. "Stainless steel reflects light and increases the feeling of space; and plenty of wood warms a space up and stops it feeling too impresonal. A water feature is very relaxing", she adds. Here are her basic tips: 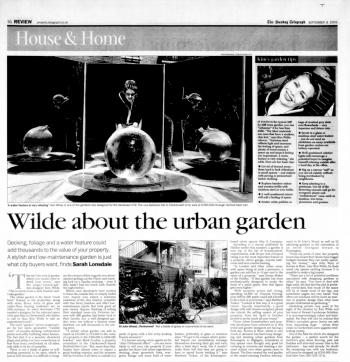