Two months ago, I bought some root ginger, but lost it in a cupboard. When I found it, it had sprouted, so I put it on gravel base on the windowsill and watered it to see what would happen. It has started producing shoots and roots. How should I look after it?
Zingiber officinale is not hardy, but grows quite happily in large pots in the conservatory (minimum temperature 20C). Plant sprouting rhizomes in potting compost; keep them on a warm windowsill, then transfer to a large pot that is free draining and rich in organic matter. Once the plant is actively growing, water and feed it liberally, and regularly spray the foliage with water. It should grow up to 90cm, with a bamboo-like appearance. Frost-resistant gingers, such as roscoea and cautleya, can be grown very successfully outside.

I have Choisya ternata on a (not particularly exposed) north-facing terrace, but it's disintegrating. It sits in an old metal bucket, without drainage, and though I have been careful not to over-water it, the soil is waterlogged.
Dear oh dear oh dear! Choisya ternata needs well-drained, sunny places, and is tolerant of drought, being native to Mexico. Its aromatic, evergreen leaves have citrus-scented, white flowers from mid-spring onwards, and it is usually a problem-free plant. That was until a certain reader dumped one in an old bucket, with no drainage or sunshine! To your credit, you do seem a little guilty about the treatment meted out to this poor plant. Planted in a suitable container with drainage holes, and in a sunny spot, it should reward you in spite of everything, just like a poor kicked dog.

I'm about to acquire two narrow, south-facing balconies, 'roofed' by balconies above. I'd love to grow permanent (albeit deciduous) green surrounds such as vines, honeysuckle and wisteria. Would they survive in containers? Should I bring soil from my present garden (East Anglian clay) as a base?
Wisterias are strong climbers in the open ground, but are less enthusiastic in containers. Pruning and training will keep them to the size you want. I grow the hardy and beautiful scarlet honeysuckle Lonicera x brownii 'Dropmore Scarlet', which flowers from early summer to early autumn, and Vitis vinifera 'Purpurea', with its fiery autumn tints. They both need a soil-based compost, with slow-release fertiliser and supports for the twining stems. Plant containers from mid-autumn to early spring, and top-dress annually in spring by removing 5cm-10cm from the top. Replace it with fresh, soil-based potting compost and slow-release fertiliser, bringing it up to its original level; water thoroughly. As you are 'roofed' by a balcony, be sure containers are kept watered. 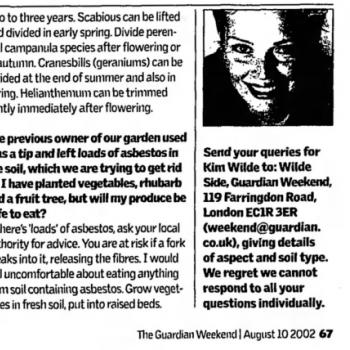