You only live twice

Ever felt hemmed in by the sheer pace of working life? You're not the only one. Meet the pop star, the athlete and the croupier who found sanctuary in the calm and contemplative world of horticulture. Andrew Purvis on gardening as a second calling. Pictures by Marc Burden.

Kim Wilde, 1980s sex symbol, singer and horticultural designer.
Even at the height of her pop career, yelling the lyrics of Kids in America to a generation of quivering, drymouthed adolescents, Kim Wilde wasn't entirely happy. "I was brought up in the country", she says, "and I always thought the rural life was best; but in the 1980s, I forgot who I was."

Trapped in a world of airports, dressing rooms and recording studios, all Wilde (now 41) really wanted was to grow lupins. "My ideal was to live in London until I met Mr. Right, then bugger off to buy a lovely house, have kids and do the country thing. But Mr. Right didn't show up."

Resolutely single, Wilde (then 30) bought a vast, converted barn in Hertfordshire. Then, some six years later, on the set of the musical Tommy, she met her future husband, the actor Hal Fowler, and they decided to start a family. "Before that, we had to get the garden in shape", says Wilde. The result was a formal garden with avenues of box balls, herbs, vegetable beds and pear trees, backing on to a meadow. Planting raspberries and watching Gardener's World, Wilde as in her element. "I thought, 'This is great! I can get big and fat, have a baby and do nothing."

Perversely, Wilde's hormones thwarted her, infusing her with energy as soon as Harry (now four) was conceived. "I enrolled on some design and planting classes at Capel Manor, then a longer course." A second child (Rose, two) intervened, along with a TV career - first as presenter of the BBC's Better Gardens series, then Garden Invaders. "It was like a condensed degree in garden design", she says. Last year, she designed a garde na tthe Tatton Flower Show, taking a gold medal. Wilde drew the planting scheme for her garden at college. "I love herbs", she says, "because they invite butterflies in. Here, we have lots of bulbs and geraniums in the first part of the year, then the alliums come up. In winter, when everything has died down, we hve these structural avenues of hawthorn and box. It's a lovely sight covered in frost and snow."

Recently, Wilde brought a wild meadow into her herbaceous borders by planting miscanthus and molinia grasses, echinacea and dramatic sedums. "It's prairie planting", she says, "which is very trendy - but that's not the reason I'm doing it." The reason she gardens is to be more in touch with her true nature: "I got more of a buzz winning gold at Tatton than I did from having a gold record anywhere in the world", she insists. "It's a path I'm on, and the pop path was predictable and taking me nowhere. Where this is leading is anyone's guess, but it will mean more time with my hands in the earth, less time worrying about my make-up." 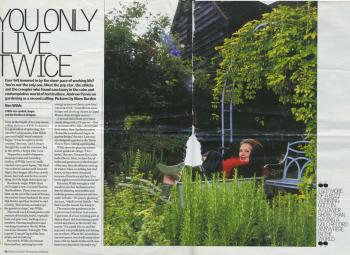