You've got m@il: Kim Wilde answers all your e-mails

She was the 1980s sex bomb with a shock of blonde hair, who had 30 hit singles, including Kids In America, Cambodia and You Keep Me Hangin' On. Kim also had a US No 1, 10 hit albums and toured with Michael Jackson. These days, she is This Morning's resident gardening expert. The eldest daughter of veteran rocker Marty Wilde, Kim, 42, famously dated Chris Evans but now lives in Hertfordshire with her husband, the actor and producer Hal Fowler, and their children Harry, four, and Rosie, two. Here Sarah Moolla puts your questions to her.

What have been the happiest and unhappiest times of your life? Xavier, via e-mail
There have been many happy times - marrying Hal (pictured top right), having my children, having hit records, working with my family, enjoying my gardening. The low time was my depression, which came when I turned 30. It was triggered by stress but I've never felt so helpless in all my life.

What was your first date with your husband? Abbey Sullivan, Chelsea, London
We met in the West End musical Tommy in 1996 and I fancied him immediately. He took me to dinner at The Ivy to impress me, thinking I ate there all the time, but I'd never been there in my life. The next day he gave me a beautiful poem and I knew I had met someone special.

Have you managed to stay friends with Chris Evans? Andy Huddart, Cossington
We stayed friends after we stopped dating, but I haven't seen him for years.

How did you get into gardening? If you were a flower what would you be and why? Sophie McEarl, Brighton
Even when I was young I yearned for the day when I'be out feeding chickens and growing vegetables. It was my fantasy to be bringing up children in the countryside and meeting Hal made that dream come true. If I was a flower, I'd be a meadow daisy because they come back every year and they're wild.

Describe your perfect day. Miss D Pearce, Pinner, Middlesex
Waking up at 10am to beautiful sunshine with the kids having managed to dress themselves. Hal would bring me a cup of tea and a gardening magazine. My mum Joyce would come over to babysit and I'd go to a few nurseries to order some plants. In the evening, a limo would take Hal and me to the Nobu restaurant in London.

Did you ever worry about what would happen when you stopped being a pop star? Richard Turner, Leicester
It was a demon which stayed with me for a long time. I didn't want to be a pouting has-been pop star pushing 50 trying to get by. I fully realised that my world could be snatched away and I'd be just another unemployed has-been.

Did you get to meet Michael Jackson on the Bad tour? If so, what was he like? Amina Chadhury, via e-mail
Three weeks into the tour, I was doing interviews where I'd have to admit I hadn't even met him yet. So his PR people set up a picture opportunity, but we didn't even have a conversation. I was just ushered in and out, and that was it.

Which pop stars did you hang out with in the 1980s, and who are you still in contact with? Catl Cook, Didsbury, Manchester
I've only met them properly recently. I did an 1980s tour last November with Paul Young, Heaven 17, Nick Heyward, Go West, T'Pau and Curiosity Killed The Cat.

Would you encourage your children to go into the pop business? Ralph Dawson, Leatherhead, Surrey
Yes, definitely, if that's what they wanted.

Why did you stop being a blonde? Richard Tan, Hertford
It was symbolic of my old pop star days. I became a blonde again for the tour and my son said, "Mummy, you look beautiful". I do think I look better as a blonde, so it's here to stay for a while.

What music do you listen to now? Gary Paine, Lincoln
I love Sara Cox and the music Mark and Lard play.

How do you keep fit? Janey Gutler, Petersfield, Hants
I went into training for the tour so I could get back into my leather pants. I run regularly and do yoga.

How does hanging out with gardeners compare to hanging out with pop stars? Sarah Proctor, via e-mail
I love talking about plants and gardening, and sharing that with like-minded people. I was a bit starstruck when i met Alan Titchmarsh a few years ago. I just stood there like a loved-up teenager. 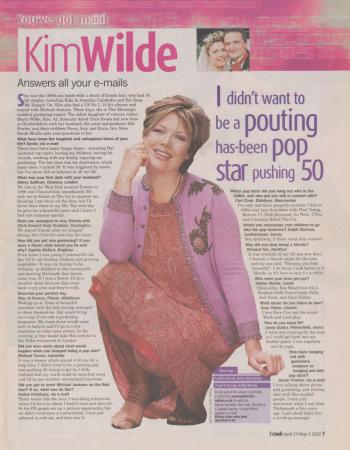