Kim Wilde, darling of the Eighties pop world, who became interested in gardening when she wanted to learn about growing organic vegetables for her young family, has taken one of the top honours at the Chelsea Flower Show.

Her Cumbrian Fellside Garden, co-designed with Richard Lucas, won a gold medal and the award of best courtyard garden. The award for best garden went to the Chelsea veteran Julian Dowle's Chelsea Pensioners' Garden, which is sponsored by Ecover.

The garden is Wilde's first design for the show. She started gardening seriously in the late 1990s, when she was pregnant with her first child, Harry, born in 1998. While on a gardening course, she was approached by a television company looking for a presenter for the ITV show Better Gardens. She was subsequently hired by the television company Bazal (now Endemol), to present two series of Garden Invaders.

She has had success at a Royal Horticultural Society show before, winning a gold medal and best garden award at the Tatton Flower Show in 2001. But, however much the RHS tries to insist there is no difference between its flower shows, and the medals awarded at them, to win gold with your first exhibit at Chelsea - and a best garden award at that - is a real achievement.

Wilde is the daughter of singer/songwriter Marty Wilde. In 1981, she launched her own singing career with the single "Kids in America", co-written by her father and brother. It reached No 2 in the UK charts, selling two million copies. In 1995, while starring in the West End production of the musical Tommy, she met the actor Hal Fowler, a fellow cast member. They married in 1996 and now have two children.

Wilde says it was her husband who introduced her to Cumbria and the beauty of the Lake District. Her garden combines elements of the region's dramatic landscape and natural resources, such as green Cumbrian slate and fellside flowers. It has the attention to detail which marks out a gold-medal Chelsea exhibit - there are even a few wisps of genuine Cumbrian sheep's wool snagged on the piece of barbed wire that runs across the back. In contrast, Julian Dowle, designer of the Ecover Chelsea Pensioners' Garden, is an old Chelsea hand. This is his 26th garden for the show, and he has now won 11 gold medals.

His garden, which represents a soldier's dream of "Blighty" (based on the wartime reminiscences of Chelsea Pensioners), is unashamedly nostalgic, with its thatched pub and neat Dig for Victory vegetable plot. Even the union flags hanging from the picket fence are suitably faded, while the wild flowers in the meadow represent fallen comrades.

The RHS Chelsea judges would probably throw up their hands in horror at the thought, but there seems to have been a bit of an "aaah" factor going on this year. Hillier Nurseries succeeded in winning their 60th gold medal; the veteran vegetable expert Medwyn Williams won a valedictory gold for his last-ever appearance at the show and the Australian Jack Merlo, who at 24 is the youngest show-garden designer, won a gold for his "Float" garden for Fleming's Nurseries. 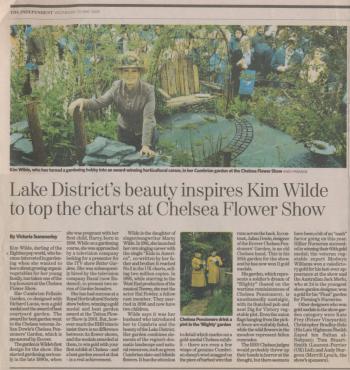 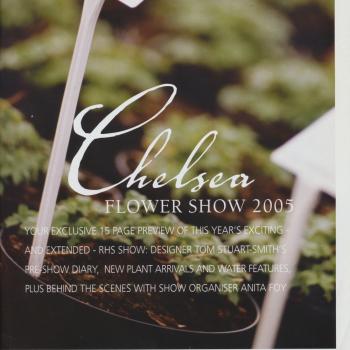