The great and the good: Kim Wilde, Hertfordshire

'At first I felt like the guy who managed to get into Buckingham Palace and sit on the Queen's bed,' says Kim Wilde, of her establishment-toppling Gold Medal and triumph in the Best Courtyard Garden category at last month's Chelsea Flower Show. 'Now I'm feeling a bit more smug, obviously.'

The 'Eighties pop star' (her label) turned gardener greets us at the door to her Hertfordshire home, wearing brown-leather clogs, a grey smock-dress and the lovely fresh complexion of a country woman at home in her own skin. (Later she will return in another, more rock-chick outfit and make-up to match for the photograph, but for now we have the later, earth goddess/mother version.) Wilde bought this house - a wonderful black-stained barn-conversion with herringbone brickwork and craggy old beams on top of a hill - in 1990. At the time she knew next to nothing about gardening, and there was hardly anything here. Today, her spacious own-designed garden includes a vine-and-wisteria clad outdoor room, a wild meadow (freshly anointed with the slate sculptures left over from the Cumbrian Fellside Garden with which she and Richard Lucas won at Chelsea), raised vegetable beds, and a mass of winding gravel paths amid abundant shrubs and flowers.

This is a garden of details: on the 'hopscotch' path, spongy patches of sweet-scented thyme and camomile are prettily interspersed with Veronica prostrata. She began with an 'avenue', inspired ('well, copied really') by a photograph in a Rosemary Verey book, that leads down to a field. For years Wilde felt this field was a bit of a liability, but lately she's been planting a wood ('100 saplings every winter') and it's the reason she doesn't think she'll ever leave. 'Part of my motivation here was trying to create a wilderness for the children to escape into.' She's just written a book about gardening with children, and has fond memories of the Hertfordshire house she grew up in, which backed on to a forest:

'It was enchanted really, we were free to wander. I still remember the bluebells, and the scent of pine needles, the fungi and "faerie rings".' Early on she realised she would need specialist knowledge if she was to continue developing her garden, so she took herself off to Capel Manor Horticultural College in Middlesex for some courses. She was a quick learner. Today she can quote Latin plant names with the best of them, though she gets quite cross with herself if one deserts her. She seems to absorb garden writers - Christopher Lloyd, Beth Chatto - and their gardens in the same way as other people devour cookery books.

Walking around her garden, Wilde constantly stops to touch things. She strokes the tufted seedheads of Pulsatilla vulgaris, fans the silvery foliage of Artemisia Powis Castle - 'it reminds me of water,' she says. She sweeps up fronds of Nepeta x faassenii 'Six Hills Giant' leaning low over a path. 'Smell that,' she says, as I reach for a yellow climber. 'It smells like pineapple.' It turns out to be Cytisus battandieri. Elsewhere, she says there's a Philadelphus that smells like 'Bazooka bubble-gum'.

Wilde loves being interviewed about gardening (though she hasn't given up on the singing - she's just back from a festival in Berlin), and she's good at it. She points out a big, floppy Oriental poppy, which is 'toilet-roll colour' - it is; and the way that a Golden hop (Humulus lupulus 'Aureus'), growing in a pot, glows in the sun 'like a lampshade' - it does. She treats her garden as an extension of her personality - obelisks for climbers made out of sticks are decorated with snail shells and feathers - and daydreams of a day in the future when busloads of visitors will come, not for a glimpse of an 'Eighties pop star', but for her planting.

Gardening with Children by Kim Wilde is published by Collins, £14.99 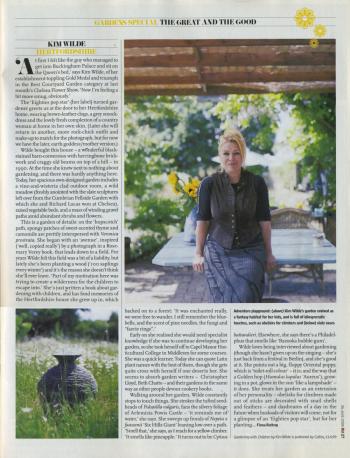