She was an 80s icon ... Now her main passion is gardening, as Prime Time found out when we spoke to Kim Wilde.

During her music career Kim Wilde sold in excess of seven million albums and 12 million singles. Now the 45-year-old mother of two says she is happiest when she can kick off her shoes and get into the garden. But it was her dream to have children and her marriage to actor Hal Fowler in 1996 which first got her interested in gardening and culminated in her new book Gardening for Children.

She recalls: "At first I didn't even have a garden, I had a rough piece of land next to my barn conversion. When I got married, I wanted to have a family immediately and we needed a garden for the children." But her own lack of knowledge was what prompted her to go to horticultural college while she was pregnant and that, she explains, "was where I got the bug". "I just can't leave it, I have to have my fix."

While her interest in horticulture developed gradually, so did her exposure as a gardening enthusiast and she was later invited to present ITV's Better Gardens.

"It's a career I'm passionate about. It pays the bills and keeps me at home and in the country most of the time so I'm still able to do the school run and be out in the garden a lot."

So, having put the days of wooing crowds with chart-topping hits like Kids In America behind her, Kim says: "Music is now my hobby, and my hobby is now my career. "It's quite confusing really. When I stepped out of music, the idea was to downsize, but it has gone crazy with one gardening project after another."

One of those projects was writing her book Gardening for Children for which she says her children, Harry, seven, and Rose, four, were her inspiration. She says her children were her first motivation to get into gardening and the book is really a tribute to them. "They came to my rescue," she explains simply. The book is aimed at parents who don't know much about gardening, showing them there are plenty of projects they can do with their children.

Kim says: "It's full of ideas and information in simple terms. There is so much to absorb in the garden it can be a time for parents and children to connect."

And Kim is also working on a follow-up book for first-time gardeners together with Richard Lucas with whom she also co-designed a courtyard garden for the Chelsea Flower Show.

But while Kim spends most of her time focusing on her new career, she still tours with her music having participated in the highly-acclaimed British Here & Now tours and achieving unusual success in Europe in 2001 with a previously unreleased song Loved. "The good thing is, it is different to having a record deal because I just get to dip in and out of it as I please. "I am really fortunate in that way, because while I loved being a pop star in my 20s, later on it became a bit tedious."

But even though she still has a ball while touring, Kim says she loves to just get back to nature. As the daughter of 50s rock star Marty Wilde, Kim recalls being in the spotlight from an early age. "That's why I love being in the garden so much now, because there, the focus is off me and on nature."

But there is also life away from the garden for Kim and husband Hal, who both love listening to much-lauded musician Rufus Wainwright. "One day we might treat ourselves to going to one of his concerts in New York," she says hopefully. Kim lives in Hertfordshire now, where she moved to when she was nine, and still recalls her mum struggling with two kids, no car and no washing machine while her dad was away becoming a rock star. "My parents were young," she says pausing and then adds, "it was tough for mum with me and my brother".

But 12 years later Kim was to be signed by RAK records and her first single Kids In America was released. This kickstarted a hugely successful career on both sides of the pond during which she won many awards including the Best Female Vocalist Award from the British Phonographic Industry in 1983. 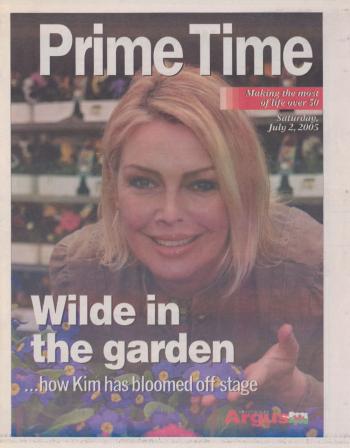 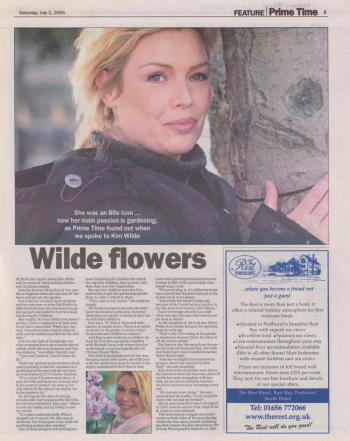