Fast-paced show in the pouring rain

The Eighties icon Kim Wilde put on a fast-paced show at the start of the festival Seegeflüster in Hegsteybad. After Julia Neigel opened the evening with her German rock and warmed up the audience nicely, Wilde left her fans no choice but to dance. Many people did, making many of them forget about the rain. Kim Wilde promised a mix of new and old songs at the beginning of her performance. This promise she kept and awakened real passion from her fans with Eighties hits like 'Kids in America'.

If only the rain hadn't been there, the start of Seegeflüster in Hengsteybad yesterday evening would have earned the thumbs up. At the beginning of the evening there were only a few drops, but in the course of the evening it turned into a bona fide country rain. 2000 people in Hengsteybad weren't defied by the rain however, instead cheering on rocker Julia Neigel and after that Kim Wilde.

"Let's make a party", Julia Neigel proposed at the beginning of her performance to the audience and made her actions speak louder than words. She'd barely started her second song when she kicked off her shoes. "I have to dance and they hinder me", she explained after her performance backstage, happy to finally be able to rest. Before then, however, she pranced around constantly, even balanced, leaning from one side on the barrier fence in front of her fans. Neigel did a forceful, rocky set, which clearly made her happy - even as she had a gulf of rainwater blown onto her from the higher stage. "I am just as wet as you are now", she showed her audience in solidarity, before she left briefly afterwards after having done one encore with her biggest hit "Schatten an der Wand".

Once heated up, the audience had only one attraction to wait for: Kim Wilde, the star from the Eighties, who had worldwide hits with songs like "Kids in America". Before the blonde Britisch conquered the stage, she answered questions from journalists in the tent and wasn't short on praise for the festival. "It's a great place, directly next to the river. Everything is organised very well. It's wonderful to be here", Kim said, while looking forward to the evening - and wished her fans a resistance to the weather like the British.

The rain was almost forgotten when Kim Wilde and her band took to the stage. They played a rocky, very fast sound, making the audience move immediately. Dressed in black, in tight jeans and high stilettos, Wilde didn't swirl around on stage as wild as Julia Niegl, but the show wasn't any less engaging. 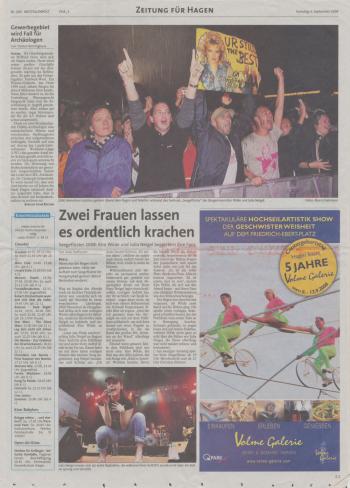