The "Nokia Night of the Proms" offered an exciting travel through time through 30 years of rock history with some 10.000 listeners during the German premiere in the Kölnarena on Friday evening.

The Proms proved to be fresher and more dynamic than ever - and with many worldwide hits, which you can only hear with this line-up on the Proms 2008.

Already 14 years conductor Robert Groslot offers this rendez-vous between pop and classical music. On the one hand there's dancing on Strauss walzes, on the other hand there's rocking to the electric band. And it was like that this year, too.

For a fresh breeze there was amongst others the new choir, the Angels In Harlem Gospel Choir. Either with 'Everybody needs somebody' from the Blues Brothers or with 'I believe I could fly' the choir from New York coloured the show which lasted over two hours. The great atmosphere was lighted by a new lightshow with thousands of LED lights, being used once as video wall and the other time as background lighting.

But the highlight was the line-up of stars this year, most of all Robin Gibb from the legendary Bee Gees. When he brought the number one hit 'Massachusetts', he received standing ovations from the hall. And that has never happened in the long history of the Proms. Pure goosebumps for the just under 10.000 visitors. 'Juliette' and 'Staying alive' followed and Gibb said: 'Next time I'll bring my brother Barry'.

Another highlight was Graham Gouldman with 10 CC. With soft pop, the evergreen 'I'm not in love' - their first no. 1 hit they played themselves into the hearts of listeners not only in the Seventies but also tonight in Cologne. With 'Wall street shuffle' and 'Dreadlock holiday' the 10 cc frontman Graham Gould showed what a great musician he is.

And that is also true for the other star of the Proms, Dennis DeYoung, formerly from Styx, who sang classics like 'Boat on the river', 'Babe' and also 'Mr. Roboto'. DeYoung filled in for Mr. Music John Miles, who is currently on tour with Tina Turner. DeYoung is more than just filling in.

And then the hall stood up for one of the pop icons of the eighties: Kim Wilde. She rocked the hall with 'Cambodia' and 'Kids in America'. It was great, what she offered on stage with her crystal clear voice. Endless euphoria in the hall. That also happened during Tears for fears. Those who were fan of Curt Smith and Roland Orzabal in the eighties, could sing along to 'Everybody wants to rule the world' and the legendary 'Shout' tonight.

But what would the Night of the Proms be without a classical part. The comedy and instrumental virtuoso's Igudesmann & Joo offered this. Coming from Russia and Korea offered an interesting mix of jokes, heartlifting music and comedy.

One should be careful with superlatives. But this show was the best and most variated shows in the history of the Proms - embellished with loads of world hits. 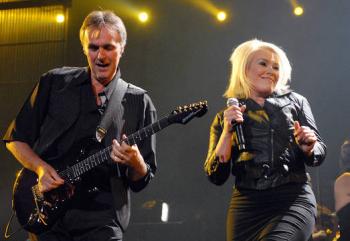